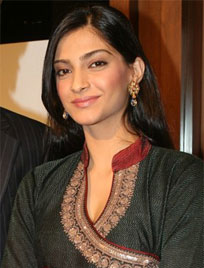 Rumors are abuzz that Sonam Kapoor, the daughter of Anil Kapoor has been signed opposite SRK in Aditya Chopra's next, 'Rab Ne Bana Di Jodi'. When asked Sonam, the actress denies saying, "I've met Adi Chopra like any aspiring actress wanting to be in a Yashraj film". Well, this does not deny that the actress has not bagged a role in Adi's next, isn't it? Maybe Sonam has been asked to keep silent until things get more clear.. Or wonder if the King Khan wants to be cast opposite a much younger girl rather than Sonam?