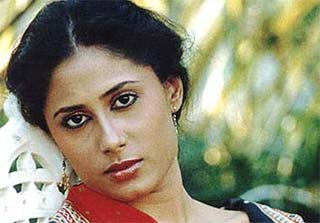 Mumbai, Oct 15 If you don't believe in ghosts, then this is not the story for you. There's an eerie story secretly doing the rounds among the cast and crew of 'My Friend Pinto'.

'We don't know what it was. But we certainly felt something. Smita inspired me to sign Prateik. I was a big fan of hers,' Bhansali says.

Says a crew member: 'At times it was chilling. Not just Prateik or the director, many of us felt a presence. We don't know what or who it was. But there was definitely something there.'

Prateik has said in an interview to IANS that he would like to break away from the constant comparisons with his mother. However that seems unlikely considering Smita is a constant in her son's life.

'We felt as though she was watching over us all through. It was more than uncanny,' says a source close to the film.

'It came to a point where we began to feel she was physically present during the shooting. We don't know how close Prateik feels to his mother at other shootings. But here she was with us all through. We firmly believe Smita was watching over her son,' says the source.

For a sequence where Prateik's character had to talk about his mother, the young actor expressed reservations.

'Prateik didn't want to do the scene where his character talks about his mother. We convinced him it was necessary. When Prateik finally did the sequence he went into a kind of trance while speaking his lines,' says the source.

Speaking of the sequence Bhansali said: 'Prateik was so close to his own mother at that point that we could almost see her standing next to Prateik.'

'It was clear that he was addressing his own mother. He finally broke down while talking about his mother,' the source adds.

'Though I didn't have the good fortune of working with Smita, I saw her in every gesture in Prateik. He is uncannily like Smita. The title and Prateik's name in the film - Pinto - came from a Smita starrer 'Albert Pinto Ko Gussa Kyon Aata Hai'. Smita was there throughout the making of the film,' Bhansali says.