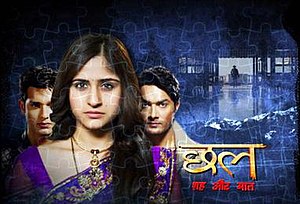 Who's doing 'Chhal' with who in Colors TV show 'Chhal-Sheh Aur Maat?'

The trio leads of the story Neha (Hunar Hali), Rishi (Abhishek Malik) and Kabir (Avinesh Rekhi) are playing a big game with each other, keeping the viewers in suspense. Till now, we have seen that Kabir and Neha are doing 'Chhal' with each other. But in the coming episodes, the viewers will get to see the track getting more exciting - a new dimension to the mystery will unfold!

According to our source, the show will take an interesting turn when the viewers will get to see the real face of Rishi - Rishi is cheating Neha! All this happened when Neha and Rishi went for their honeymoon, and Kabir met Rishi offering him money to assist him in this charade.
A little birdie from the set informed us that Rishi is not who he appears to be and is abetting Kabir in his plans.

Is Rishi really involved with Kabir in his plans? The upcoming episodes of Chhal- Sheh Aur Maat will soon bring out the real face of Rishi before Neha.

8 years ago this was owsome drama nd character of kabir nd aditi is superb i realy love this couple.

8 years ago Super exciting show! Just love it!
Hunar Hali is a superb actress!
The character Kabir is an awesome actor...just love his hypnotic eyes! :)

+ 6
8 years ago The best show to watch rite now..i have given up IPL for this show..it So much exciting,,CSAM rocks..Kabir Neha Rishi..the Devil Trio Rocking

8 years ago wish to see love scenes between kabir and neha/aditi...

+ 2
8 years ago i think so the show's tagline should be "expect the unexpected"..awesome show..love kabir and neha ..

+ 4
8 years ago This show is amazing me loving it loads. All the best to its trio leads ...they are doing an awesome job.

Kryten 8 years ago Me says that Rishi is involved with Kabir in his plans.

+ 2
8 years ago awesome serial... i like Kabir.. m always has doubt on Rishi & his intension.. Kabir is too good