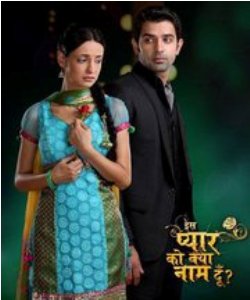 Last couple of months for Star Plus's 'Iss Pyaar ko kya naam doon ?' have been very difficult and frustrating. The storyline is stagnant and the misunderstanding seems to be have found a permanent place to stay. Fans have expressed their disappointment over the current treatment of storyline.

But, it might just be the time for 'Arnav and Khushi' fans to rejoice. The current storyline is heading towards the big Dhamaka - Khushi knowing why Arnav married her! However, the question plaguing the minds of the fan is the extent of truth revealed by Arnav, played by Barun Sobti.

We spoke to Sanaya Irani regarding this and she confirmed the news saying that confrontation is round the corner-" The promo has been shot, where Arnav tells Khushi that he is aware of her relationship with Shyam. Unfortunately, we don't have the script right now , so I cant comment on how it will proceed. But, I feel it is time the misunderstanding starts clearing."

6 years ago Barun sobti we miss you

6 years ago Barun Sobti missing you so much dammit
All the best for your Projects...
Please Comeback soon...

6 years ago Barun Sobti missing you so much dammit

All the best for your Projects

+ 3
6 years ago Missing Barun Sobti.. Wishing him the best for everything.

SaniZeesh 8 years ago Sanaya Irani is the bestest actress i have ever seen on screen!