COLORS is a channel known for its unique concepts!! Now going with this trend, another show titled 'Is Des Main Na Aana Ladoo', produced by Shakuntalam Telefilms will soon go on air!! After Balika Vadhu and Uttaran, this show now deals with female infanticide. 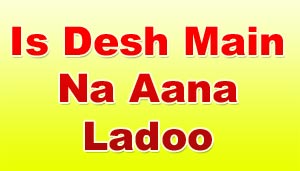 Featured Video
ale infanticide. The story revolves around the village where birth of a girl child is still a sin", says our khabroo.

"This practice can be seen even today, and the show just states how a new-born girl is sacrificed on the name of God. The male member of the family, while sacrificing asks God to give that child a rebirth, but as a male", adds our source.

"The show will initially show the mannerisms of villagers towards the girl child and how they curse their better half for it. Later on, a point will come where one will see opposition from the women of the village", quips the source.

When asked about the star cast, our source states "The show will see many new fresh and promising faces.  Audition took place all over and then the cast was chosen".

There is a buzz that this show will be given a prime time slot, because of its strong concept. Also, if sources are to be believed, the axe might fall on Mohe Rang De.

However, Sunjoy Wadhwa, Producer of Mohe when asked said, "I have not got any such info from the channel as of now".

When we called Gavie Chehal, the lead actor of Mohe, he too rubbished the news saying, "Going by the script we have got, the story will lead to the partition phase. And if this happens, then we have a story line for the next five months at least. So I don't know from where this news is coming".

However, our source states, "The TRP's of the show has been little low though the show has successfully completed its 100 episodes. The creative of the show is planning some changes in story line, but the future of this show is dicey for sure".

Talking about the launch date of Ladoo, our source concludes, "The show will come on air by end of February".

We called Shyamashis Bhattacharya, Producer, Shakuntalam Telefilms for a confirmation on Ladoo and he says, "Yes, the teaser of Ladoo is on. And if you see the promo, you will clearly understand the concept. As of now, I cannot divulge any more info".

Well, we need to wait and watch what slot Ladoo grabs finally!

12 years ago May I ask why so few of our Forum members comment on this show? It is a show that is doing fairly well versus many other serials. So I am curious to know why this is.

sivanisha 13 years ago pleassssssssssssssssss dont come on my faver serial mohe rang de.
I will neve watch ladoo if it repalced By MRD

nightwalker 13 years ago the conceot is for sure fresh, i mean in a way all of us knew through our history textbooks that such a practise was done way back in india. but its the first of its kind in indian tv.but i just feel that shows like this highlight negativity that it still exists in india.the ultimate goal of such shows will obviously be trps but i am sure they will have this end message like balika vadu that its a step taken in order to stop such practices.but do you guys really think it will actually put an end to all this. i mean we the urbanities sit here n watch these things and be happy and content that thank god i was not born in that place, in that era.such shows might give us the message that such practises still happen but is anyone doing anything about it.can these shows actually claim that they have made a difference and got down such cases in numbers.i think these shows are just showcasing the negativity in our country and we here look at them and feel sorry for them and the production houses and channels are just cashing on this ptitiness that we show to such people, but nothing really is happening. i seriously wonder whether such shows are actually a succes or not provided they have told the audience their REAL GOAL(trps) ... what do you guys say?may be i am being too rude or illogical for some people, but i actually dont see these serials showing such problems actually tackling such problems

13 years ago the concept of the show seems so crappy and depressing. who will watch such a show??? certainly not educated, urban ppl like us

+ 3
13 years ago is des kis des..lol
anyways looking forward..but well the concept has already been shown in balika vadhu..somehow...
anyways thanks