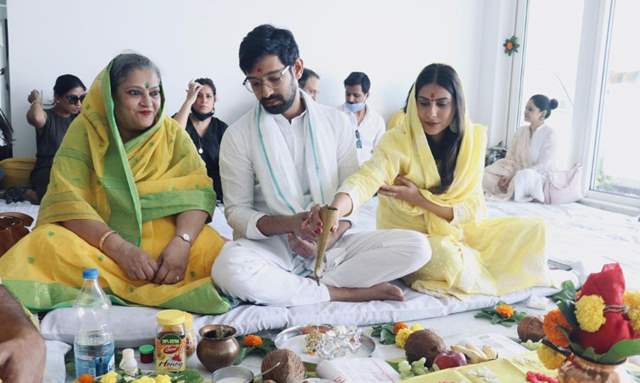 Actor Vikrant Massey confirmed the reports of his engagement with girlfriend Sheetal Thakur in 2019. The duo was reported to be engaged with a small Roka ceremony and the function took place somewhere around mid-November, 2019 and saw the attendance of close family members.

Recently, the couple achieved a major milestone owing to their career and personal life as they are all set to move into a new house. The actor even hosted a Griha Pravesh Puja with his future wife and mother-in-law.

Sharing an adorable picture, Massey called his mother-in-law ‘Human-Modak’ and asked his fans to ‘reserve their wishes’.

Coming from the television background, Vikrant Massey has successfully carved his place in the list of impeccable actors. The actor has come a really long after her made his acting debut in 2004 with Kahaan Hoon Main, which did not go on air, it was five years later when he had tasted success with his role in Balika Vadhu. Vikrant had switched to Bollywood when he bagged his debut film, Lootera.

Interestingly, a number of projects have been announced recently starring Vikrant in the lead role including Red Chillies ‘Love Hostel’, the Hindi remake of 2017 Tamil action thriller, Maanagaram and 14 Phere with Kriti Kharbanda. Apart from that, he will be seen in the Hindi remake of the 2020 Malayalam film, Forensic.