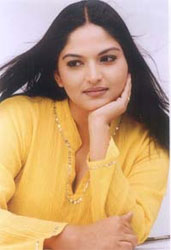 Indira Krishnan, who was last seen playing mother to Iqbal Khan in Smriti Irani's Waaris is all set to play a different role in COLORS' Rahe Tera Aashirwad, produced by Jay Productions.

When asked about her role, Indira quips, "I play the role of a tantrik, Saudamini. The name itself sounds so powerful. The tantrik specializes in all sorts of Black Magic, and she has been planted by Urvashi to kill Bhakti, the lead played by Snigdha".

This will be a cameo role for the actress. "I have always tried variety, and I love the look they have given me here. I do not look the typical tantrik; I am seen wearing black shiffon sarees, and have a wet look throughout", quips the actress.

Apart from Waaris, the actress was earlier seen playing mother in Saathi Re, Ek Ladki Anjaani Si. In Ardhangni, she donned a grey image and looked different too.

Well, versatility seems to be the name of the game for Indira!!

+ 3
13 years ago she was awesome in waaris, good luck to her