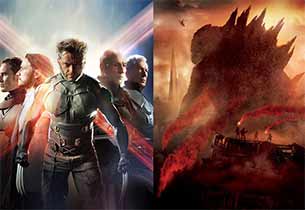 Be it commercial entertainers like "X-Men" and "Godzilla" or a biographical drama like "Foxcatcher", there's room for a mix of all genres of Hollywood movies in India, just as there's an audience for every kind of Bollywood movie, says PVR's Sanjeev Kumar Bijli who is set to treat movie buffs with international quality cinema.

"Everything is co-existing in Hollywood and Bollywood. There's a market for everything. Just like there's room for a 'RA.One' and 'Holiday...' at a time when people appreciate 'Kahaani' and the like. It is nice and comforting," Bijli, joint managing director, PVR Limited, told IANS in an interview.

As an exhibition company with over 428 screens spread across the country and with plans to expand by 80 screens per year, the focus is to provide a variety of content - and that which whets the appetite of viewers with commercial and art house or alternative cinema.

Bijli, who manages the cinema acquisition and distribution business and programming activities of the company and also oversees the operations and the marketing, attended the 67th Cannes International Film Festival in May.

Apart from having a dekko at "great films" there, Bijli acquired "Foxcatcher", a film based on the real-life murder of Olympic wrestler Dave Schultz, for PVR Pictures, the distribution arm of PVR Limited.

Other titles acquired include "Alone in Berlin", "Our Kind of Traitor", "Equals", an untitled Lance Armstrong biopic, "Legend", "Civilian", "Inversion", "American Express", "Hologram for the King", "London Fields" and "Visions".

Indian viewers are looking out for "quality", and as a distributor, PVR Pictures wishes to bring films with an "Indian sentiment" to the country.

That explains their decision to bring star-driven Hollywood films like "American Hustle" and "The Wolf Of Wall Street" at the same time that they "pushed the envelope" for movies like "12 Years A Slave", "Her" and "Nebraska" - catering to the new class of cine-goers keen on content-driven films.

Is there a growing market for Hollywood films in the country's tier-II and tier-III cities?

"No, not as much. It's more a city phenomena. We do get one or two odd requests from places like Dehradun, Bhilai and Indore...but we know audiences all over are accepting different content.

"Five years or so ago, audiences didn't have a choice of cinema, so we're trying to create that demand and cater to it by getting in a variety of content," said Bijli, pointing out the "evolved consumer interest" in Hindi movies like "The Lunchbox" and "Queen".

The next big thing on PVR Pictures' platter is "Expendables 3". The movie has been slated to release on Independence Day (August 15), and the Sylvester Stallone-starrer is likely to cash in on the extended weekend.