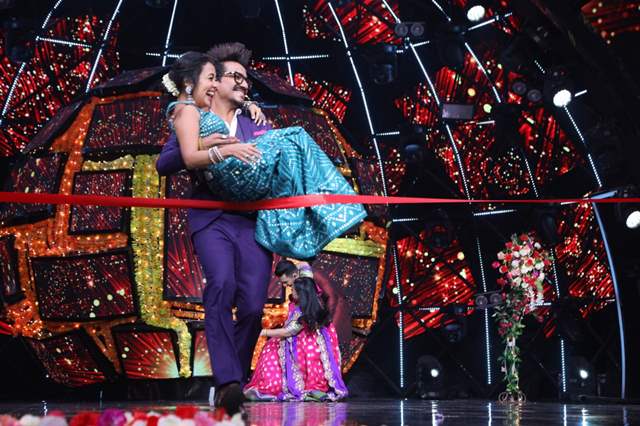 Indian Idol 11 is already garnering a lot of limelight because of the immensely talented singers. The shaadi season is on the verge of starting and everyone is gearing up in their best attires to rock the stage. This weekend, Indian Idol would be celebrating shaadi special where the contestants would be belting out popular wedding songs.

To encourage the contestants, the laughter queen Bharti would be coming accompanied by her better half Haarsh to make the  celebrations bigger and better.

In that episode, Himesh challenges Haarsh and Aditya to pick up Bharti and Neha and have a race. He adds that who ever wins the race is more loving towards his love interest. But then to tweak the entire thing, Himesh asks them to pick up each other's love interest. While Haarsh picked up Neha and won, Aditya in an attempt to pick up Bharti, drops her. This created a funny moment for everyone present on the sets as this is the second time he has dropped someone on the sets of  Indian idol . In the earlier episode, Aditya had dropped Neha too while the two were performing a romantic dance.

Kriti Sanon Joins The Brigade Probing CBI To Take Over ...
13 minutes ago

Director Mayank Sharma reveals what went behind the making ...
48 minutes ago

Pages from Sushant's Personal Diary Leaked: Here's What the ...
59 minutes ago