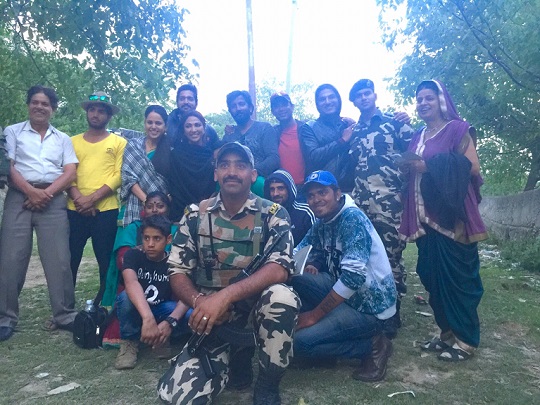 Amidst dealing with the hustle bustle and keeping up with the schedule while shooting in the exotic locales of Kashmir from the past two months, the cast of Suryaputra Karn were in for a complete surprise lately.
Inquisitive? Read on to know what the surprise was!
Recently, the lead actors Vishesh Bansal aka young Karn, Anand Suryavanshi aka Adhirath and Mouli Ganguly aka Radha were having a gala time shooting in some of the most beautiful locations in chilly temperatures for the show.
This is when some of the soldiers of the Indian Army were intrigued as they witnessed the cast shooting atop snow clad mountains. Extremely polite and courteous, the soldiers interacted with the cast and crew of the show and in no time the actors became quite familiar with the army men and the soldiers showcased their graciousness by throwing a small party for them!
An excited Anand Suryavanshi said, "Yes, some soldiers from the Indian Army threw a party for the cast and crew. It was an extremely sweet gesture. They called us for dinner and treated us to some of the most amazing Kashmiri delicacies. We interacted with their families and discussed everything. They were interested in knowing the process of making a show while they surely had a lot of interesting stories to tell about their life as a soldier."
"We do hear a lot of things about unrest in Kashmir, but the soldiers made us feel completely at home. I really respect them for their bravery and for what they do for our country. I would surely like to go back to Srinagar and meet them again."
Goodluck team Karn!
Shachi Tapiawala Rathod

5 years ago love Indian Army they r super hero. so Happy They love this show.

Thanks for this article.

wow so happy for Suryaputra Karn team they r enjoy ...

+ 4
5 years ago Did they tell the armymen the story of Suryaputra as narrated in this serial?

5 years ago i love Indian Army they r super hero.