Birthdays are supposed to be memorable and it looks like post-wedding, Imran Khan's wife, Avantika, has gone to great lengths to ensure just that! She made his first birthday following their matrimony one he is sure to remember for a long time to come. 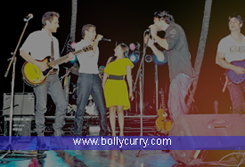 Apparently, Imran is a long time fan of internationally acclaimed pop-rock band, Strings. Knowing this, Avantika planned out the perfect surprise by getting them to perform on his birthday whilst on their honeymoon in Phuket, Thailand. How thoughtful is that, sigh!

On the day in question Avantika told Imran that they were headed to a barbecue at the seaside and that there would be a live band performing for him. Little did he know what awaited him! For all his presumption about local bands and such, imagine his surprise when it turned out to be Strings!

According to sources, Imran declared this birthday went up to join the list of his most memorable ones, but of course! Not only did he get to see his favourite band play live but he also joined them on stage and jammed to some tunes with them.

We are told that Imran got along superbly with the band members and they went on to spend an extra few days mingling with the lovely newly weds.

Here's to a 'rocking' start to what we hope will be a lasting marriage. Come July, for we eagerly await to watch the ingenious gesture reciprocated in kind!

Kundali Bhagya’s Manit Joura plans a thoughtful surprise for his ...

Mandana Karimi and Radhika Apte come out in support of ...
31 minutes ago