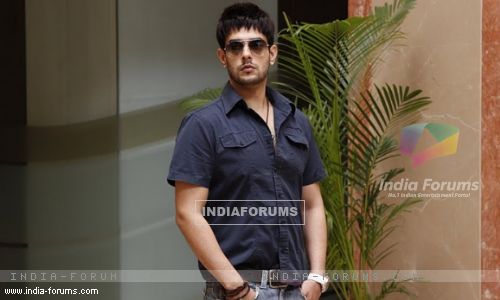 Dashing actor Hasan Zaidi who won the hearts of the people with his impeccable acting skills in Life OK's Hum Ne Li Hai... Shapath as a daring cop is back on screen again in a new role.

Yes, Hasan is all set to woo his fans in Sony Pal's upcoming show Tum Sath Ho Jab Apne, where is being paired opposite bong beauty Barkha Bisht. While he remained away from TV from quite some time now, he will be seen playing  a rough character in the upcoming show.

When asked Hasan what was he busy with all this while he says, "I did Hum Ne Li Hai... Shapath some two years back. I did some episodes in shows like Gumraah for my good friend Vikas Gupta and in MTV Webbed. I acted in two films and did a few plays as I wanted to explore theatre and all facets of storytelling."

Talking about his character in the show Tum Sath Ho Jaab Apne, Hasan says, "Imran is a person who has lost a lot in life. There is no will in him to live a life. A reason to look forward in life is lost. When he sees the little girl Najma (Ashnoor Kaur) and her dream, he realizes that life exists till you live. So life is to celebrate, take it forward, help people and it will bring back the happiness in your life. It is Imran's journey from being someone who doesn't want to live to providing love, life, a support to other people and finding his own in that process. It's a beautifully projected show and well written."

As the show has a Muslim backdrop and Hasan being a Muslim when asked him as to how familiar was he with the setup of the show he avers, "Absolutely familiar. When I came to Mumbai, I always wanted to do a good work. It's not just about a Muslim show but it's also about the language. It is Urdu. I speak very good Urdu and my father was a renowned poet. We used to speak in Urdu and it is based out of Hardoi. I am from Lucknow so everything was just right and lot of things which I have been craving for came together."

So how is it working with the versatile actress Barkha Bisht Sengupta? He avers, "It is superb. She is a rock star and very good actress. I have known her. We had common friends. It's a riot on the sets. She has a daughter and I have a daughter too so we keep discussing about our toddlers."

Being a father in real life, Hasan says that he loves kids and he has started understanding more, "The kids in the show are little elder. I am someone in my family, from my friends and even in the school who was always popular with kids. Kids love me and I become a kid. That is the only true emotion once we grow up our innocence and loyalty ends when we are a kid and now that I am a father my interaction with the kids has become little more soulful because I also understand a lot more. Like your mother will always say Jab tak tum maa nahin banoge tab tak tum nahin samjhoge that happens when you have a kid. So I love kids. They are superb."

Lastly conveying his message to his fans he says, "Have a lot of fun. Be nice, be kind, be responsible and just believe in yourselves. Do whatever you want to do in life."

6 years ago Loved him in Khotey Sikkey! He's a good actor.

6 years ago Hasan is back! can't wait to see more of him. and today will be his entry. i am soo excited to see him as imran. sounds like an interesting character :D

+ 2
6 years ago I can't believe Hasan is back :)
Was missing him only a few days ago when I was watching old Shapath episodes :)

6 years ago story seems very interesting and heart touching...
looking forward to this show. after a long time heard a good story.
welcome back hasan and barkha..

6 years ago Omg I can't believe he already has a kid!! He looks so young! He was awesome in khottey sikkey though I didn't watch his other show. Good luck in this one Hassan!