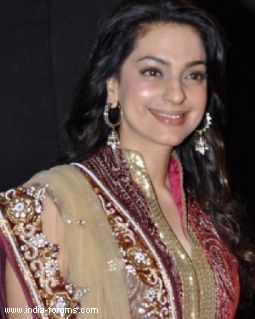 Mumbai, Nov 23 Juhi Chawla flatly refused when she was asked to sing a line or two for the audience at a recent TV awards function.

Juhi, who hosts chat show 'Badmash Company' on Colors, was at the channel's first edition of Golden Petal Awards in Mumbai earlier this week when host Sajid Khan asked her to sing for the audience. But Juhi, who was trained in classical singing by Pandit Pandharinath Kolhapure, flatly refused.

Sajid cajoled her a lot, but she asked him to 'Drop it'!

'They (organisers) didn't even tell me, I've to come and sing here,' Juhi said as she tried to keep the mike away. But her words were quite audible.

Juhi, looking resplendent in a maroon and gold suit, was on stage to give away a few awards and walked off stage soon after. Witty host Sajid couldn't help but say: 'Thank god, we have a good editor! And this can be snapped off. I was asked to create moments, so I was just trying to do that.'

Akshay Kumar and John Abraham have been busy extensively promoting their film 'Desi Boyz' extensively and the duo had a blast doing so at a Dubai nightclub.

'Dubai's temperature was soaring hot last night! For the first time, the crowd witnessed Johnny boy and me grooving at a nightclub in Dubai. 'Desi Boyz' rocked the flaming hot city. Dubai you guys were FAB,' Akshay posted on his Twitter page.

He also posted a picture of a female fan hugging him - and the frenzy is there for all to see.

Akshay and John play friends-turned-foes in the masala movie. The film, releasing Friday, is about two friends, hit by recession, and how they end up being employed as pole dancers.

It's official, I'm in love: Neil

Neil Nitin Mukesh is in love...finally! But alas, it's not a girl...it's his iPad!

The actor announced his 'relationship status' on Twitter, and built the suspense around it.

Neil says the device has all qualities of a perfect partner.

'I mean serious it one of my best friends :) always there so friendly. Entertaining , informative , intelligent , understanding :) caring:) Sorry to disappoint u guys but this one sticks by me all the time doesn't leave me for nothing :) through thick and thin :),' he wrote.

Neil will be seen next in Abbas-Mustan's 'Players'.