After doing numerous stories on con men, the cast and crew of Aek Chabi Hai Pados Mein fall prey to two con men who visited their sets. On April 11th, two men, one posing as a producer and the other as his assistant, visited the sets of Aek Chabi saying they wanted to cast a few members of the show in their film. 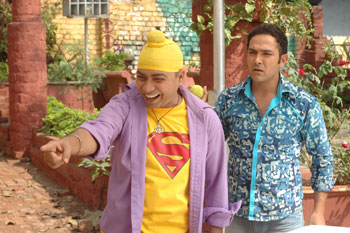 Featured Video
The two men relayed their script to two of the cast members, Ujjwal Chopra (Mushtaq) and Manoj Goel (Jugle). But the two were very nonchalant as they thought the script sounded more like that of a B-grade movie. But as the producer left, the actors were in a complete frenzy as they realized that their mobile phones were missing. They went ahead to alert the EP of the show, Surendra, just to realize that he too had misplaced his phone.

When contacted, Surendra Malhotra, EP said about the incident, “Actually two people had come on the sets saying that they were a producer and a writer. In the media industry we usually respect a producer and so we didn’t think of asking for any id card. They said that they wanted to narrate their script to the artists, so we thought that there was no harm in doing so, but later after they left, we realized that our cell phones were missing. That was when we realized that the two people who came on the sets were thieves.”

The actors Ujjwal Chopra and Manoj Goel were unavailable for comments.

Seems like a lesson for all our stars to keep their phones within their sight so that they don’t get stolen!!!

But yep, you should always keep your phone in sight. :) That way it'll never get lost

14 years ago that is so messed up! uff...people can be so cheap!

14 years ago thats sooooo bad!!!
all their numbers and msgs and everything gone with the cell phones!
shocking!

+ 2
14 years ago awwwww so sad, hope they will be more careful in the future.