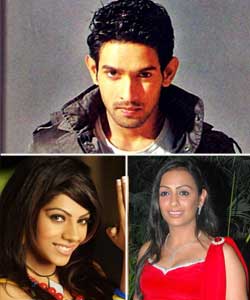 After Imagine's Baba Aiso Varr Dhundo got new producers to handle the project, the show will see a series of amendments. We hear that the show is ready to take a 20-year leap and therefore few actors will say bye bye to the show.

An insider from the production house reveals, "Vikrant Massey, the main lead of the show, Ashita Dhawan Gulabani who plays the character of Guhashala and Tanvi Thakkar will not be a part of the show. Tanvi Thakkar has already put her papers down and in another two days she will shoot for her last scene. The makers are still working on whether her character will make an exit or be replaced."

We called Tanvi to hear her side of story. She confirmed saying, "Yes, I am leaving the show and am going to miss Baba."

Vikrant Massey too shared the same sentiment."I will be leaving the show. The first reason is that the show is taking a leap and I need break. 10th December is my last day of shoot after which I will be going on a vacation," he said.

Ashita Dhawan also wasn't convinced about the leap. She states, "Yes I will not be playing a 20-year old mother. They are working on the script and are still deciding on the track.

The viewers will surely miss their key actors on the show. Let's hope the jump to the future manages to captivate the audience's attention...

9 years ago All the best to Vikrant, Tanvi & Ashita for their next projects

Good decision made by the three!

The Channel is dragging this show till they don't find another show to fill up the time slot... the day they find it, that would be the end of the show...

9 years ago awww...I am so going to miss them alot! I hope they do other shows. I love Vikrant and I wish he would stay on the show. Without him it won't be the same. Vikrant and Juhi are amazing on the show.
I hope the CVs wouldn't do this.

9 years ago I am happy for Vikrant...he's immensely talented and deserves a better character and a better story.

Ambz 9 years ago Am really gona miss all of them atleast till the end of the year Vikrant plsss stay in the and tell these Cvs to postpone the idea of leap not soo soon,Asita was very good with her evil character also Tanvi with her innocence is sweet...

Ve want more happy Murti scenes in the show b4 the leap..PlSSS Dont let us viewers down...

+ 4
9 years ago Congratulations to all 3 actors - Vikrant, Asita & Tanvi - for making a sensible decision. Other than Juhi, I wonder why the other characters are even bothering to stay w/ this serial, that has nothing left in it.

halobegum 9 years ago Why is it necessary for a 20 year leap, has the story deteriorated? Why can't the writers come up with a good idea to keep the characters as they are now? Wouldn't that be a better storyline than getting such a young actor to play an old character.
If the writers can't come up with a good storyline, there are plenty of others who can, get them changed!
Don't put in a leap! All loyal viewers will be disappointed.