He's made audiences laugh in several films and has signed on four more comedies, but actor Shreyas Talpade insists he is not concentrating on just humorous films even though he enjoys doing the funny man's act. 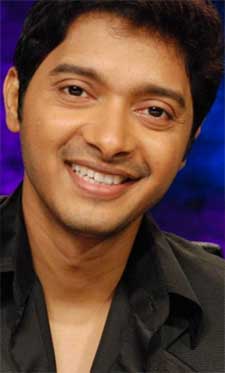 'Attempting comedies is not everyone's cup of tea...it's very tough to carry off and my doing comedies has just been a coincidence, as the scripts were very good. But that doesn't mean I'm doing only comedies. There is a mixed bag of roles that are happening to keep me going as an actor,' Shreyas told IANS over telephone from Mumbai.


'There are a couple of films that I'll be doing that are going to be thrillers. It is only if you attempt something new that keeps you going; otherwise it's like offering the same staple diet,' said the actor, who has given some hilarious performances in 'Apna Sapna Money Money', 'Om Shanti Om', 'Golmaal Returns' and 'Paying Guests'.


But Shreyas, who debuted with the more serious 'Iqbal', refused to divulge any details about the forthcoming thrillers. 'It's too early to talk about them.'


The laughathons he has lined up include 'Hook Ya Crook', 'Aage Se Right', 'Season's Greetings' and 'Mirch'.


Apart from comedies, Shreyas has also been a regular in multi-starrers. Is that a conscious move?


'It's not like that. It's just that my career has been mixed so far. I go by what film appeals to me. I'm going to do solo roles too. And for that matter two of my forthcoming films 'Click' and 'Aage Se Right' have me in the solo lead.'


The 33-year-old is also known for his mimicry skills that he showed off in Nagesh Kukunoor's 'Dor' (2006), but he has gone slow on that front now.


'I used to do a lot of mimicry when I was in college and I won quite a few awards too. But I've stopped doing it because it started affecting my acting career.


'Nagesh, however, knew about my mimicking capabilities and he came out with it in the 'bahurupiya's' character in 'Dor'. But the art is now more like an added thing in my whole package than anything else,' he said.


Not many know that Shreyas started his career by acting in many Marathi soap operas and doing stage shows across Maharashtra before foraying into Bollywood.


Asked if he would like to go back to his roots, he said: 'Well, that's quite on halt as of now because of my Bollywood commitments. But I will produce a Marathi film this year and it'll go on floors this September.'