Director-choreographer Farah Khan has sought to bring the curtain down on a raging controversy over the depiction of Bollywood veteran Manoj Kumar in her film 'Om Shanti Om', saying she isn't 'bothered' about him any more.

'I am not bothered about him anymore,' Farah told IANS over the phone when asked for her reaction to Manoj Kumar's decision to file a case against her over his portrayal in the 2007 blockbuster. 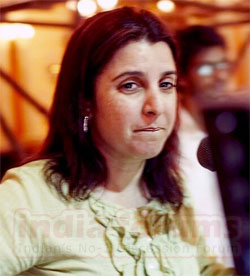 Manoj Kumar had told a media outlet he would be filing a case against the makers of 'Om Shanti Om' as they have not kept the promise of deleting the scenes that mock him.

He had said that he gave the nod to the film because of the intervention of the legendary director Yash Chopra who had mediated talks between him, Farah and Shahrukh Khan, who starred in the movie.

Manoj said all of them had mutually agreed that the objectionable scenes would be deleted but this was not done.

On being asked if the scene was shot keeping in mind the artistic liberty of the film industry, the offended actor had said: 'I had studied in school that liberty is the undying passion of the mind and one cannot use it to humiliate others. This is an insult to Indian nationalism and patriotism.'

Manoj Kumar had taken objection to the scene in which his younger double was shown being beaten up by the police outside a movie theatre since they could not recognize him. He had also objected to another scene in which Shah Rukh delivered a mock 'Thank you' speech in a drunken state and concluding by saying he was Manoj Kumar.