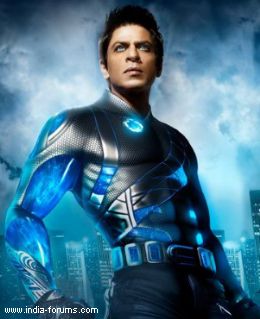 Mumbai, Sep 26 Shah Rukh Khan is neck deep into the promotion of his upcoming mega-budget sci-fi movie 'Ra.One'. He is appearing on TV shows, collaborating with various brands and using other marketing tools to promote his superhero movie, but the superstar refuses to be labelled a 'marketing guru'.

'These terms are all nonsensical things. Every actor talks about his films. I'm here since so many years. I also do things when my film is about to release, but I'm no marketing guru,' Shah Rukh told reporters here Monday on the sidelines of an event to announce the collaboration between You Tube and 'Ra.One'.

'You need to be innovative when you reach out to people, so that more and more people can be aware about your film and that's what I'm doing,' he added.

Shah Rukh may not like to be called a marketing guru, but in Bollywood, SRK and Aamir Khan are known to market their films in 'zara hatke' manner and for introducing novel ways of promoting movies - so much so that others have started taking the same path.

'Ra.One', slated for an Oct 26 release, has been directed by Anubhav Sinha and also stars Kareena Kapoor.

Shah Rukh is a man with affable manners, who treats his fans with politeness, who is patient when dealing with the media and last but not the least, his wit and humour are his forte, but he revealed that while shooting for 'Ra.One', he got so angry that he threw a chair at the wall.

'There was a day when I got very angry. I was hanging from the cable for a very long time, I wanted to go to the bathroom and people were disorganised. I was very tired too. So when I got down I threw a chair on the wall in anger, but it was a plastic chair.

'I told them that why is everyone just treating me like a producer, I'm a superstar, they can't make me hang for two hours,' he said.