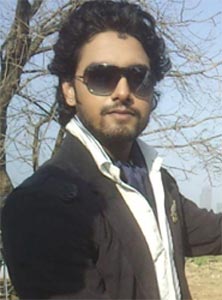 Which is the weirdest restaurant name you've come across?
Papa Pancho

What's the first thing you like to do when you get up in the morning?
Have my cup of bed tea.

When I mention your college which is the first thing you remember?
My singing days, I used to sing then.

Which bird or animal best represents you?
Rabbit, because many people say I look like rabbit. Well they say monkey also but I don't want to say that…

One self –defense technique you can always rely on.
Kick and run.

The person you adore the most?
My mom.

What kind of an expedition would you choose- one in a submarine or one in a rocket?
Rocket.

On a scale of one to ten how much would you give for your people skills?
9.5!

A book or Film that you'd recommend
Jodhaa-Akbar

A good and a bad thing about Indian summer-
Good thing is that I don't feel lazy to take early morning walks. I love doing it but in winter, I just don't feel like leaving the bed.
The bad thing is shooting schedules in the hot sun.

Which actress would you like to get stuck in a lift with?
Priyanka Chopra

Which is your favorite section in newspaper?
Film & TV and Sports.

Are you a person who enjoys the world of imagination?
Yes, I love that world and I'm always in my own fantasy land. Many people have complained to me about this too (laughs).

What do you do to make sure you are a responsible citizen?
I don't throw garbage out of my car. No matter how long the drive is. I gather it and put it in a trash bin. I also see to it that I don't waste electricity and water.

Which CD is in your car player right now?
Nusrat Fateh Ali Khan

maryann150 10 years ago Hello Dear,
My name is maryann.elvis i am a single girl
I saw your profile today in this site(www.india-forums.com/)and i stopped to take a very good look at it.
I want you to know that i will be interested to know you better because you sounded very sweet in your profile and i will like us to become friends and know each other the more.
Here is my email address (maryannelvis1@hotmail.com ) send me an email today please!
Yours forever,
maryann.
(Remember that distance,age or collour does not matter in a real relationship but love matters a lot).
I am waiting for your reply now!
maryannelvis1@hotmail.com

disha_sen 10 years ago wow he is super cool!!! wuld luv to hear him sing.

rahmona_pakswe 10 years ago He used to sing?! Would love to hear him one day.

Loved the interview and his answers were nice.

Salman Khan's Official Statement about his Connection with ...
20 minutes ago