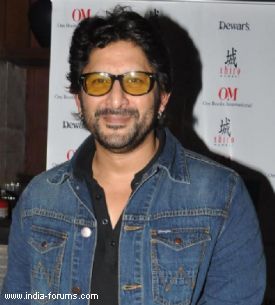 Moviemaking is as tough as running a business, which is tricky and taxing, says actor Arshad Warsi, who tried his hand at production with "Hum Tum Aur Ghost" and ended up burning his fingers.

"Sehar" fame director Kabeer Kaushik wielded the megaphone for "Hum Tum Aur Ghost", which saw Arshad as a guy who can see dead people, but the story failed to connect with either the audience or the critics.

The 45-year-old's experience has taught him that a "producer's job is a thankless job".

"It is one of the most difficult things to do and especially with someone like me - I am a terrible businessman. If I want to produce, I have to get somebody involved," Arshad told IANS.

Nowadays a producer has turned into a businessman and a movie is treated like a product, whose packaging has become essential.

"It's a tough job in today's time when movies are not just films, they have become products. So you are not a producer any more, you are a businessman who needs to sell his product. It's a whole different ball game now. The whole charm of making a movie has gone. Now it's very taxing to do it," he said.

Known for his comic timing in "Munnabhai M.B.B.S" and "Golmaal" series, Arshad has put film production on the backburner.

Currently he is busy with his acting projects and he is looking forward to the release of "Dedh Ishqiya", a sequel to "Ishqiya", and "Mr. Joe B. Carvalho". Both are coming out in January next year.

Audiences expect to see him in the same avatar as "Ishqiya" in director Abhishek Chaubey's "Dedh Ishqiya", which also features Madhuri Dixit in a pivotal role, he said.

"With 'Ishqiya' the audience expects to see Naseer saab and me fighting, they expect to see me going outrageous and nuts, they expect this sensuous, seductive scene in the film," he said.

"It was wonderful because I am usually nervous with such scenes, but Vidya (Vidya Balan, his 'Ishqiya' co-star) has made me a solid guy now. Now I can go though it happily," he said.

Interestingly, his wife Maria Goretti doesn't like him getting cosy with co-stars on the screen.

"Maria doesn't like it at all. There are no two ways about it and I can totally understand," said the actor, who has two children with Maria.

"I don't like it myself. There was no hint of me ever becoming an actor. It was by default that I became an actor. Poor thing, she didn't know what she was getting into," he added with a hint of humour.

Survival is not easy in filmdom, thanks to tough competition, but Arshad is not insecure.

"I am not competitive. A lot of people say that 'number game doesn't matter to me', but very few mean it.

"When I do a film, for me, every person in that film is important. I don't feel insecure at all. I want my film to do well. It becomes easy to work with a person like me. I improvise for everybody on the set," he said.

"Ishqiya" struck the right chord with the audience and Arshad is confident about the second part as well.

(Uma Ramasubramanian can be contacted at uma.sagit@gmail.com)