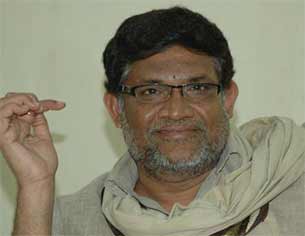 Actor-filmmaker Tanikella Bharani along with singer-actor S.P. Balasubrahmanyam will attend the screening of their Telugu drama "Mithunam", which will be screened at the upcoming 2nd Indian International Film Festival of South Africa (IIFFSA).

Balasubrahmanyam plays the lead in the film opposite Lakshmi.

IIFFSA, a multi-city event, is scheduled to be held in Pretoria, Cape Town, Durban and Johannesburg Jan 16-23, 2014.

"I'll be travelling to South Africa along with S.P.B (Balasubrahmanyam) sir to attend the screening of our film. We have already screened our film at the Chennai International Film Festival in December and it received good response from the audience. I hope we will get similar response from people there too," Bharani told IANS.

Bharani is happy that four Telugu films will be screened at the fest.

"I'm so happy that four Telugu films have been selected. This is a proud moment and this is just the beginning. We will see more of our films in several film festivals across the world in the future," he added.

"Mithunam", which was about the love story of a septuagenarian couple, was lauded by critics and audiences alike.

Not able to attend sister's wedding, Actor Arun Mandola opens up on ...