View Profile
Hrish Tandon was a businessman, whose only passion was music. One fine day, he decided to take a risk and indulge in 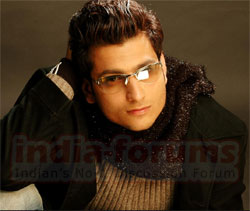 his passion. The result is his debut album, 'Phir Se Wahi'.

Hrish underwent a three-year training period in classical music, and also learnt how to play the synthesizer and mouth organ. He found a godfather in Anand Mahendroo, who initiated him into the industry and advised him to learn its various aspects, including acting, directing, dancing and editing. Hrish eventually formed a band of his own, but it was only when he fell in love that the inspiration for his album began.

The debut singer has signed up with T-Series for the album. The music has been composed by Subhash Pradhan, and Sareem Momin has written the lyrics, for two songs. Praveen Bharadwaj is responsible for the rest of the tracks. Shareen Mantri is the director of the video, and the cinematographer is Manoj Soni. The title track is a duet between Hrish and Naziya Khan.