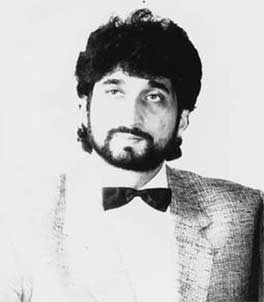 Nadeem Saif, living in exile since 2000 after being accused of music baron Gulshan Kumar's murder, says he wants to return home.

"It has been 17 years of torture and punishment, defamation and bias," said Nadeem of the famed Nadeem-Shravan duo.

Gulshan Kumar, the founder of T-Series, was killed in 1997 and the composer was holidaying in Britain when the incident took place.

Q: You have apparently asked the Indian government for an apology? Why do you think you deserve an apology?

A: The High Court of England, the House of Lords of England and the Indian Session Court have all cleared me from this false accusation... I've seen in the last 17 years of my torment that in spite of being innocent, in my opinion, under the instructions of some biased politicians, some members of the media have tried to tarnish my image and continuously hurt me by writing negative.

Q: Why do you feel you are being victimized?

A: For instance, I would like to make it clear once and for all that I had never fled to London, as it was reported in a leading newspaper. The fact is that I was on a holiday with my family as well as for my wife's medical checkup. But after the unfortunate incident, they found in me a scapegoat and fabricated a false case against me... All this has been proved over the last 17 years in all the courts of law. You asked me why I deserve an apology? I think this attitude has to change and the media must play a serious role.

Q: What have these 14 years been like for you?

A: I'd like to mention that it has been 17 years of torture and punishment, defamation and bias. Of course it has been tough, but god's mercy has made me tough towards all the injustice meted out to me by those officers who were handling the case... But as you know that when life gets tough, the tough becomes tougher and innocence has its own strength from the Almighty.

Q: Have you ever tried to convince Gulshan Kumar's family of your innocence?

A: Yes, initially I did try but, with my clear conscience, I did not feel the need to go on and on.

A: I would definitely want to return to India, but when I see the television and see the amount of corruption in just about every department, I feel that I would stand no chance of having an impartial judicial proceeding. The judges in my opinion are not independent of the government.

Q: Nadeem, how have you managed to keep your career going in exile? Surely it must be really tough?

A: Arabian attars, one of my very successful brands has helped me keep up. Life is tough as everybody knows whether it is in India or in exile.

Q: Have you kept in touch with your musical partner Shravan?

A: There has not been much communication between us mainly because I've been extremely busy designing for the international fragrance market.

Q: For nearly a decade you and Shravan ruled the Bollywood charts. How do you look back on your exceptional decade-long success?

A: We not only ruled the Bollywood charts for the decade but we still rule because our style of music is still appreciated. I never look back on my past laurels. I'm the kind of personality who wants to break new records and do more creative work. My life was and will be dedicated towards creative entertainment.

Q: Would you like to return and resume your career? If so, would you partner with Shravan again?

A: Yes of course, I wouldn't mind resuming my career since the demand for my music is still the same.

Q: What career are your children planning to pursue?

A: Que sera sera whatever will be, will be... Insha allah. We all try to take one day at a time.

Q: Have any of your old friends from Mumbai kept in touch with you?

A: I'm very fortunate by the grace of god that not only my friends from Mumbai, but from all over the world come to meet me and 365 days of the year, we are hosting either a lunch or a dinner.

Q: If you had to change one thing in your life what would it be?

A: I would love to fly to India and resume my work at the Sunny Studios... I hope good sense for justice prevails and the media takes up the cause of innocence and sees to it that I get justice that I have been denied for the past 17 years.

On Return to TV, Ellen Addresses 'Toxic Workplace ...
52 minutes ago