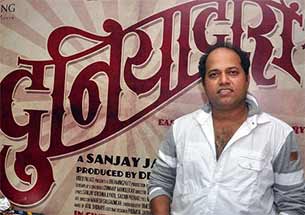 Marathi filmmaker Sanjay Jadhav, who has recently delivered a hit film "Duniyadari", says he would love to remake the movie in Hindi.

"The subject of 'Duniyadari' is universal, so I would love to remake the film in Hindi. If I remake it in Hindi, I would need a big star for the film and the right banner, so let's see," Jadhav told IANS.

"So far I have not approached anybody for the remake," he added.

Directed by Jadhav, "Duniyadari" featured Swapnil Joshi, Ankush Choudhary, Urmila Kanitkar and Sai Tamhankar. It is based on the theme of friendship and love.

Jadhav, who is currently busy with three to four Marathi projects, says he would love to direct a film in Hindi soon.

"I think that's the ultimate goal of every (Indian) filmmaker (to make a Hindi movie). I would love to get into Hindi films, but as I said, you need the right banner for every film. If at all I direct Hindi films, I want to work with big stars like Ranbir Kapoor. I don't want to make small Hindi films," he said.