Mauli Dave, the contestant of SRGMP Challenge 2007 and now the host of Rock N Roll Family, captured the hearts of millions of her fans with her very first rendition on SaReGaMaPa stage, earning her the title of “Maiyya Maiyya girl”. She is celebrating her birthday on 3rd June and on this occasion, India-Forums gave all her fans an opportunity to ask questions and pass on their best wishes for her birthday. We had an exclusive interview with this “Indian Shakira” where she talked about her experience of being a contestant and a host.

Catch her exclusively answering to your own questions. Here is a small sample of what to expect from the interview. 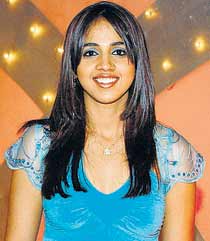 Featured Video
Very few people knew Mauli two years ago, but now everyone recognizes you... How does it feel getting so much of name and fame?
It all happened very quickly. Before the show no one knew me, but after SaReGaMaPa people recognized me and started addressing me as “Indian Shakira” or the “Mayya Mayya girl”. It feels really nice that people remember me and it has been nice to get so much name and fame.

If there was one actress you would love to playback for, then who would it be and why?
My favorite actress is Kajol and I would love to do playback for her. Now I know her professionally and personally. She is a very fine actress and nice human being. I would definitely want to give my voice for her.

Who do you admire most in the music world?
It is ought to be A.R. Rahman and it will be a moment for me to cherish when I meet him.

Any plans for coming up with an album this year?
Plans are going on to release an album. My brother and friends are helping me with it. But we are yet to finalize the Music Director for certain songs. We will definitely come out with it very soon.

What does Mauli has to say about all the rumors surrounding her? How does she rate herself as a singer and host? To know all this and more, do not forget to catch her exclusively in India-Forums radio on 3rd June 2008, Tuesday at 10 PM IST.

mofidan 14 years ago Happy Birthday. May al-mighty god fulfil all ur dreams and whatever u wishing for may come true. I also celebrated my birthday on June 1.

14 years ago i feel soooo proud when someone from outside of INDIA gets recongnition and fame in our industry (as i m from US).....she got the luck and talent in her favor....however, the key is to keep this popularity and talent alive....b/c as we all kno...we have made ppl celebrities in one day and we forget ppl very easily...so just keep things sizzling and moving all the time!!!!

Aravinda 14 years ago It is highly commendable, that Mauli who is born and brought up in USA can speak/sing hindi songs so fluentluy. Very impressive.

14 years ago omgg its mauli lmaoo
i m in my class rite now---i live in houston very close to where she lives in USA and my frend knows her personnaly lol----and she is rite beside me...she is saying she used to sing with mauli and her mother also taht mauli is annoying and retared lol hahaaa

as for your voice-- i love kajol to the fullest, but i personally think u should sing more for someone like bipasha basu...sexy voice, sexy face :D