Having delivered brilliant performances in ‘Iqbal’ and ‘Dor’, Shreyas Talpade has once again come up with a stunning show in ‘Om Shanti Om’. Winning acclaims for all his performances, Shreyas is now coming in a new role in Nagesh’s ‘Bombay to Bangkok’. The film is already the talk of the town and in this romantic comedy Shreyas is paired with a Thai actress in the lead. Recently, we talked to Shreyas at length on his new film, heroine and his future plans. Here are the excerpts.

Q: Tell us something about your next film ‘Bombay to Bangkok’.
A: This is a light hearted romantic film depicting the love story of an Indian boy and a Thai girl. My role in this film is that of a bawarchi and a small-time thief. In the process of the thefts, one 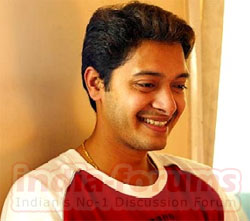 Featured Video
day I steal something that happens to belong to a mafia. Realizing its value, I camouflage as a doctor and fly to Bangkok to sell the item there and once in Bangkok I come across a Thai girl who works in a massage parlor.  First we become good friends and then fall in love and together try to sell the item. You may call this film a typical Bollywood masaala film as it has all the ingredients of a successful Hindi film.

Q: We have heard that you have also sung a few songs for the film?
A: Yes, you may call this the first lipsing song in a Nagesh movie. There is a disco song ‘Same, same, but different’ where Lena and I have sung in parts. I remember that when the film’s music composer Salim Suleiman was trying to teach us the song by raising beats with his fingers on the table, we had no problem at all. But when we were taken to the recording studio, we had a tough time. Then I realized how difficult it is to do someone else’s job. Anyways, I am happy that everyone helped us a lot in making our first music venture a success.

Q: Would you like to tell us something about your co-star Lena?
A: I enjoyed a lot working with Lena. Initially, there were some hiccups in getting the right tuning between us. But, I made efforts to ensure that she did not feel like an alien amongst us. I thought that if I were doing a Thai film, I would have faced the same problems, and so I did my best to put Lena at ease. Besides, each and every member of the unit worked hard to make her feel easy on the sets and gradually she became a part of the unit.

Q: This is your third film with Nagesh. Do you consider him as your friend or godfather?
A: It is very natural that we are good friends. Together we have done three back-to-back films and the best part of this is that they are all on different subjects and my roles were different too. We have always tried to present something new before the audience each time. Today Nagesh and I are so close that he knows exactly what he can expect from me, while I am aware of his demands and expectations. It is true that we are good friends, but we never try to take undue advantage of this. He is always my director on the sets and I do what he wants.

Q: Did you ever feel that Nagesh has been trying a new experiment with each new film with you?
A: Look, Nagesh has always been experimenting with his films and does films only on subjects that appeal to him. However, he never forces his likes and dislikes on others. Even today, before casting me he asks me if I would like to do the film with him. The fact is he needn’t ask me about it for we are very good friends. Nevertheless, he is a professional and always maintains professionalism. I am happy that I have succeeded in two previous experiments carried by Nagesh and am working hard to make the third one a hit too.

Q: Your award winning film ‘The Hangman’ is still to reach the audience. How much does 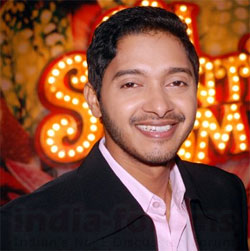 it pain that the film is yet to be released?
A: It is very natural that when a lot of effort and money has gone into the making of a film and it is not released, everyone associated with it is pained. And the pain is even more when a film like ‘The Hangman’ does not release. Everyone who has watched the film has accepted that it truly deserved the award. The film revolves around a hangman and his son. Disturbed over his profession, the hangman desires that his son would be educated and become a police officer some day. But destiny has other plans and things change in life for them.

Q: Your performance in ‘Om Shanti Om’ has been appreciated widely. Are you getting any benefits from this?
A: Look, there is definitely some benefit. I feel very fortunate to have been a part of this film and it is the biggest film of my career so far as this provided me with an opportunity to work with Shah Rukh Khan and Farah Khan. They as well as the audience liked my performance in the film and I give the credit to them. I am thankful to Shah Rukh and Farah Khan for the audience has not only liked my performance, but also my character in the film.

Q: So can the audience expect that you will be cast in their next film too?
A: (Laughingly) I am also hoping the same. Actually, It always feels good to work with good people. After reaching a certain platform one need not worry about getting roles. Both Shah Rukh and Farah are very passionate about films and I am sure that their next film will also be a great entertainer and I will be a part of it too.

Q: Apart from Hindi films, what are you doing in Marathi films?
A: Recently, along with Mukta Arts I did a Marathi film titled ‘Kande Pohe’ and it is scheduled for an April release. Soon I will be engaged in the promotion of this film, where I have done a cameo in a song sequence. Since Hindi films consume a lot of time, presently I am busy with Hindi films.

Q: Are you making any other Marathi film apart from ‘Kande Pohe’?
A: (Laughs) If this film succeeds, I will dare to make more.

Q: Tell us something about you forthcoming films?
A: My forthcoming films include Rohit Shetty’s ‘Golmaal Returns’, Sangeet Siwan’s ‘Click’ and Shyam Benegal’s ‘Mahadev’. Presently, I am engaged in the shooting of these three films.

Q: In addition to these, we have heard that you are acting in a film by M F Hussain….
A: Yes, you are right. I will be portraying M F Hussain in a film based on his autobiography.  The film will not cover the artist’s entire life, but only a part of his life – it will cover his journey from 17 years to 35 years. However, it will take some time for the film to go to the floor. Although Hussain Saab is eager to make the film, he is not keeping good health. Besides, the scripting part is yet to be done. So it is too early to say when the film will be made.