Well known TV actress Sakshi Tanwar who had disappeared after Kahaani Ghar Ghar Ki will now be seen on the big screen opposite Ashutosh Rana, in the film Coffee House. "We essay the part of a husband wife. They are publishers of a newspaper. My character (Kavita) is more practical and principled than Ashutosh(Samar), hence there is lots of conflict between the couple", quips the gorgeous beauty. 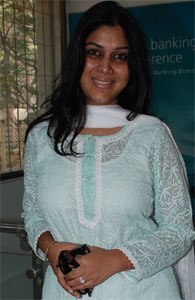 Featured Video
Coming to the title she says. "This film is set in a Coffee House where, Ashutosh who also runs a theater group meets his actors. I am also there. There are a number of other characters (Youth, retired people) as well with their own sets of issues. How all these people come together and try to create a socio political change, is what Coffee House is all about".  She further added that "Years ago when she was in college, she and her friends would spend hours at such economically prized eating joints".

Sakshi did admit that post Kahaani she felt a bit lost. "For, the moment I had come to Mumbai, I had started working for the Balaji show, hence did not know what to do. "As a result I decided to take off to US and UK for a break.  Later when I returned, rather than taking up any kind of work, I decided to explore the other side of the camera. I assisted a friend in a Doordarshan show 'Samman' in all creative departments, i.e. writing, music etc. This experience was an eye opener, as I realized that we actors have the easiest job to do, while all the real hard work is done by others, who never get noticed".

Besides Coffee House, Sakshi has one more film up her sleeve, but does not want to reveal more. "I had been offered Coffee House during Kahaani's time. As the director was the one who actually began my TV career years back with Dastoor(Doordarshan), I immediately hopped in when he told me that he wants to now try making cinema", explains Sakshi.

On a possible return to TV, she says, "I will need something really challenging. As an actor, there is so much more to try if somebody gives you a chance. I have only done a few shows apart from Kahaani, so the sky is the limit".

13 years ago thnx, i hope she comes back, she is really good!

13 years ago Thanks A lot TB for this interview.

So finally Sakshi is back!I was eagerly waiting to see her back and rocking.I miss KGGK and Sakshi a lot.Glad to know she has one more film in her kitty.Hope she gets to play more challenging roles and we can see her more often.Love her to bits.Sakshi looks simply gorgeous in the the pic above.All the best for your new projects and CH.Sakshi...you are the best.Loads of love.

+ 2
13 years ago my my my first of all TB thanks a ton for this..i was wondering kahan gayab hai...just adore her...all the best to u for everything sakshi

13 years ago All the very best Saakshi you are the best female actor on TV and always will be for me. Your jounery in Kahaani was one of its kind, and you set new boundaries and heights for so many actors on TV right now.

I pray you get brilliant roles in bollywood where you can shine just the way you did in TV.

Best of luck for all your new ventures, hope to see you back in TV too!

+ 5
13 years ago I Miss Her Soo Much, i Totally Love her soo Much
I Loved KGGK So Much, Her acting is Just Fab,

Best of Luck For the Future Sakshi -
Imran No.1 Fan ..

13 years ago I miss you, Sakshi! Thanks for the article!

13 years ago I cant wait see movies coffee house
sakshi is all the best big star of bollywood.

+ 4
13 years ago Oh my gosh, Sakshi- I miss you! You gave a meaning to Television! You totally rock, all the best on CH, and I''m sure you''ll have success every step in life!
Love you loads,