View Profile
Mumbai, April 2 (IANS) Actress Esha Deol, who has played a loud Tamilian in the comedy 'One Two Three', has one regret - that her mother Hema Malini, a true-blue Tamilian, was not around to watch her recently released comic caper. 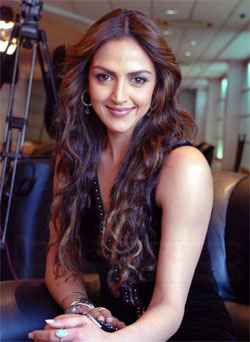 'My mother has become quite a jet-setter travelling all over the place for her dance recitals. She's in Kolkata right now. I'll make her see 'One Two Three' as soon as she returns,' Esha told IANS.

The boisterous bit on screen notwithstanding, Esha stood out at the premiere of the movie in her chic makeup and elegant gown. 'I guess I wanted to create a contrast to my loud brassy character in the film. People see me as a tomboy. But I can be quite a lady if I want to be,' she said.

Esha is now gearing up for the release of her first action film 'Hijack'.

'But let me warn you, I don't do any of the kickboxing and all that stuff I'm dying to do on screen one day. Though this is a hijack-adventure story, all the action converges on Shiney Ahuja. I'm the airhostess and therefore very timid and gentle. The director, Kunal Shivdasani, made sure I don't jump out of character suddenly. It's a very realistic action drama,' the actress said.

She dismisses stories of her differences with Shiney. 'I don't know where that came from. Shiney and I had a great time shooting 'Hijack',' Esha said.

'Hijack' would be Esha's last film for a while. 'I haven't signed anything. And I won't until something worthwhile comes along.'