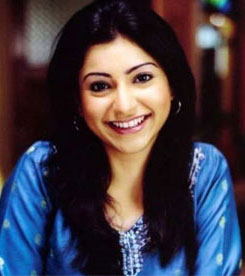 Featured Video
Did you always want to be an actress?
Actually, no. Things just sort of happened to me with Halo, for which as you know I won an International Award. That gave me recognition and during my break for studies the ads flowed in. The ads gave way to Baa Bahu aur Baby.

Is there any truth when they say child actors lose their innocence?
It all depends on the child's upbringing. It's on the way the parents treat the child. I have been there…but I don't think I've lost my innocence. People on the sets still address me as bachcha. They say my face drips with innocence! I think it eventually depends on the atmosphere in which the child is brought up. It's the responsibility of the parents to keep the child grounded.

Apart from acting what are your other interests?
I'm very much interested in writing. I love jotting down poems. I accidentally discovered that I have a knack for photography when I was clicking away with my cellphone. So I think that would be my latest interest, so to speak.

What qualities make you a strong personality?
I'm very confident. And I believe that bad days will pass with time and that they only make way for the better.

What are the qualities you think you lack and wish to build?
I think I need to learn to be patient.

In BBB, you play a handicapped girl. Did anyone from your family object to taking up this role?
My mom was a bit concerned. But she got over it. My dad had absolutely no trouble with it. My grandma was not at all in favor of the role. She questioned how I could ever think of taking up such a role. She said – yeh kya polio …and all. (laughs). But then overall, I got the support of my family.

Tell us about your off-screen relationship with Birju aka Amit Verma.
He is a great actor and a good friend. He is one of the most decent people in this industry.

And with Aniruddh aka Karan Sharma?
We have a fun relationship. I keep comparing him to Hrithik Roshan and then he feels shy. We are like two buddies.

Is J. D, a Godfather to you?
No. He is not a godfather to me. But yes, he is protective of me and his whole team in fact. He looks at his professional team like it's his family. I know that he calls me the 'lucky mascot' of Baa Bahu aur Baby. But that's just his good heart speaking and I'm honored nonetheless by his compliment.

What kind of role will make you take a chance at Bollywood?
Any role with substance. I don't want to play a bit part in a big banner. If its movies of directors like Farhan Akhtar  or Vishal Bharadwaj then yes I would take up any role because all the roles in their movies are memorable. But if it's a Karan Johar film, then I'd go for nothing less than the lead part.

What are your plans for the future? Do you discuss with family?
I don't make plans for the future at all. I take things as they come. So the question of discussing them with my family does not arise. But when an offer is made I do consult my parents. But eventually they leave the decision to me.

iamabeauty 12 years ago she is really a innocence baby!
i love her acting.its beautiful! n i am a big fan of hers too!

She is a Fab Actress, All the best for your Future Benaf !

sonia bajwa 13 years ago Her Fav hobby should be eating.The way she is putting on weigh ,she will replace Guddi Maruti.LOL

13 years ago nice interview, thanks 4 it!

buh i love the part wen she said she keeps comparing karan sharma with hrithik!....lolz......

13 years ago I really like heracting in BBB .. if she ever takes movie roles .. she will be very good she knows how to act plus she is drop dead gorgeous