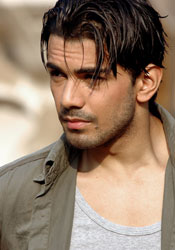 Featured Video
After playing an egoist character of Arjun in Jersey No.10, Abhinav Shukla is all set to make an entry in Babul ka Aangann, in addition to being part of COLORS’ new show Jaane Kya Baat Huyi.

Abhinav has already started shooting for his new role and will soon be seen in the track ahead in Rajasthan. “I play the role of Ratan who was Aastha’s college mate and had a long crush on her. Though he has a little bit of negative side, he is a very positive character. Ratan has some peculiar habits as he always keep playing with his fingers. There are many exciting things to do in the role and I am quite happy to perform”, quips the actor.

Talking further on his role, he says, “Mine is a cameo and will continue for a month. But chances are high that the role may get extended. It’s all up to the creative team”. Ratan will act as a savior for Aastha in the show. “Aastha and her family come to Rajasthan for a puja in a temple where there is a ten year long belief that performing this pooja can be harmful. I meet Aastha here and stop her from performing the rituals. To know more about this track, you need to watch the show”, adds Abhinav.

In addition to this, Abhinav will be seen wooing Shweta Tiwari in COLORS’ upcoming show, Jaane Kya Baat Hui…

+ 5
14 years ago WOO HOO! Looks as though the payal track is gonna end soon! I think maybe thats why they are gonna go to Rajasthan maybe to pray for the family's happiness or something..But of course it turns out diff. As long as Payal track is over soon..I cant wish for anything else. Thanks soo much for the article.

14 years ago thank, and good luck to him lets see whats in store for us

+ 8
14 years ago Abhinav in BACN that's nice. Hope creatives don't turn him evil in the show. All the best Abhinav!!