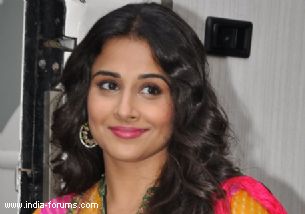 "I just know Messi because he is good looking! My friends tell me when Messi's game will be telecast, that time I switch on the TV and watch...else I don't have any interest," she admitted to reporters here while promoting her forthcoming release "Bobby Jasoos".

The detective comedy revolves around a female character. While Vidya plays the female lead, Ali Fazal plays the male lead. The film is directed by Samar Shaikh and is co-produced by actress Dia Mirza and her beau Sahil Sangha.

The actress met Bengali superstar Prosenjit Chatterjee, fondly called Bumba da, at his residence here. She said the two were keen to work together but no suitable script had come their way yet.

"I told him that today (Saturday) Bobby has come to meet Kakababu (one of Prosenjit's popular on-screen characters adapted from a series of novels).

"Bumba da has encouraged me a lot. I know him from 'Parineeta' days and the late Rituparno Ghosh wanted to make a film with the two of us and we always discuss that he is no more but we should work together sometime...but we don't know when that will be possible. We haven't received a script which we both like...," she said, adding the actor wishes her via sms before every release.