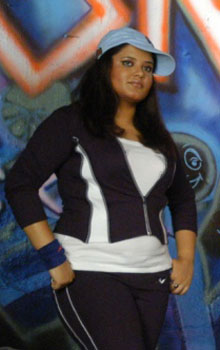 Ujjaini Mukherjee, from Kolkata who earlier participated in Himesh Reshmaiya’s Rock Gharana during Sa Re Ga Ma Pa Challenge 2005 and later went on to win the singing show, Ek Mein Aur Ek Tu with Ashwirya, was the first contestant to get ousted from Star Plus new reality show Jo Jeeta Wohi Superstar.

Participating in the show as a Champion, Ujjaini when asked about her elimination said, “I was expecting my elimination this week because my last week’s performance was very bad and I got the least score from the judges”. However, the girl could not believe her ears when Mandira Bedi announced that she was in the bottom Three. “I blasted out when Mandira gave me the news that I am in the bottom three”, quips Ujjaini.

Jo Jeeta Wohi Superstar being the third reality show for her, the girl avers that she had no tension whatsoever to participate with the best of the best. But the only disappointment for her is that, “I was given the song by the channel and could not select the song of my choice for my last week’s performance. I feel I could not give my 100 percent to the song and hence did not do well and this is my only regret now”.

When Ujjaini got an opportunity to sing on one of her favourite song ‘Maiyya Maiyya’, the singer found herself out of the competition. “ All said and done, I sang ‘Maiyya Maiyya’ before I left the stage”, says the sad yet confident Ujjaini.

realityshows!! 13 years ago Ujjaini is surely not a very good singer if she ant sing songs given to her by the channel ,she was not the only one not given a choice of song others were there too so when could perform why couldn't she!!

13 years ago Even her Maiya Maiya was horrible enough!

13 years ago I agree with you gauri... when she first came into the reality shows she wasn't that fat tho she was healthy... but in a year and half she has put on like 20kgs atleast..lol

+ 5
13 years ago shes a good singer but compared to the other champions she was horrible...her performance singing yeh ishq hai looked like a first time singer who has never participated in a singing competition.

But this is her 3rd one and she still doesnt have to hang of it!

+ 4
13 years ago Can't she come up with a better excuse than this one?

+ 2
13 years ago What chance is she speaking of??? She has to sing well for judges to think she had one bad performance. Her singing is gone down and wants another chance???

Well she was bound to be out with a singing performance like that.

13 years ago any how she was not even so gud in tht maiyya maiyya .i liked her in ek main aur ek tu after tht she left riyaaz i guess so she was horrible in this show