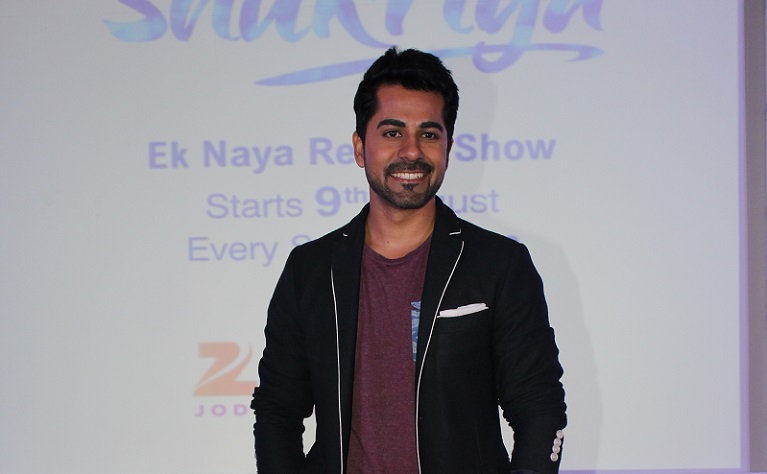 In a conversation with TellyBuzz, Gunjan shares more about hosting the show, his experiences and much more.

When we asked Gunjan to share his experience on hosting this show, he told us, "It's not an experience; it is something which I can't even describe in words. For an actor or an anchor, every show they pick up is an opportunity or a platform but this is something unique. I am surprised that how we forget to show this emotion of ours out of so many that we keep showing to others. I got an opportunity to get associated with such a beautiful show which I think is a blessing from God for me and on top of that I also got an opportunity to add value to the show. It's an anchor driven show and the show will have some real life stories. As an anchor, I could have either ruined it or could have taken it to another level. I am glad that I was able to do a good job as told by my director and creative team. Now I am waiting for audience's feedback. It has been a wonderful experience for me. This experience has taught me to be more humble and celebratory about every moment of my life."

The beauty of the show appealed Gunjan so much that even if his schedules were busy, he actually fought to have this show in his kitty. He further told us, "I have fought for doing this show. I knew Ranjit Ji from quite a long time as we have done a show together but I haven't met him from a long time. Then one day I went to meet him when he called me. During the audition, I was told that this show is not about any script, you have to feel it to communicate it in a better way. During the audition, I felt that everything was just coming straight from the heart. I was eager to do this show but my schedule was already busy with Pro Kabbadi so I spoke to the team of Pro Kabbadi to adjust my dates so that I can do this show. I just wanted to be a part of this show because this show is so beautiful."

As the concept of this show is about expressing gratitude to the special ones in our lives, we wonder to whom Gunjan would like express his gratitude. When we asked him about it, he said, "I would like to thank my parents for giving me true values in my life and teaching me the importance of prayers. My father does a lot for other people in life and my mother has taught me the value of giving and sharing in life. I am happy today that I have done a lot for a lot of people. Nothing feels better in life than making someone smile. It's a reality of life."

Sharing about what was Gunjan busy with post Madhubala and about his plans to return to acting, he said, "After Madhubala, I was busy doing a show called Spirit of India for Zee TV. I have been shooting for it for 8 months. I have been travelling throughout the India. The show is yet to be aired. Then, I was busy with Star Guild Awards in Jan 2015 and now I am doing Kabbadi. I have been getting offers for a lot of daily soaps but I want to choose something interesting and unique. I jumped like a baby when I was offered this show as it was something unique. I am blessed to be a part of this show. Right now I am in talks for so many shows but I don't want to talk about them as I believe that my work should speak. Hopefully things will get materialized soon. My hands are full with Shukriya and Pro Kabbadi till August end."

+ 2
5 years ago Madhubala EIEJ will always be a cherished show for me...

+ 3
5 years ago Agree with Ananya. Madhubala Ek Ishq Ek Junoon was, is and will always be the best TV show on Indian television.
Glad to know about Gunjan's next project.

5 years ago Madhubala EIEJ the bestest show. Gunjan all the best for all your projects.