Twinkle Bajpai, the Lucknow born girl got into the industry as a participant in Sa Re Ga Ma Pa Challenge 2005, but later on got a firm standing in soaps thro Zee’s Ghar Ki Lakshmi Betiyaan. 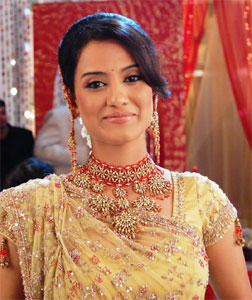 Featured Video
First of all, how is it to work with Balaji Telefilms?
It’s really amazing as I am working with the best people! I had been waiting for this opportunity and am glad that I have got it. I admire Ekta, the person as she goes out of her way and even calls up her actors to tell them that they did a good job. She did the same to me and I was very thrilled..

Your character in Kyunki started off as a very innocent girl, but now you have turned grey.. How did you find enacting this transition in characters?
It has been a very nice transition for me. Playing positive is fine, but when the character turns grey, you need to bring out the needed nakras, bit of the eye rolling etc. The biggest challenge for a person playing negative I would say is to laugh when a person before him cries. And according to me, an actor who can portray a grey role well is a good actor. Moreover, the narration given to me here in Kyunki was so good that it got easy for me to bring out the evil side of Vaidehi.

So, which phase do you like the best?
I like my current phase which is the negative track as I am doing something different!

Who do you interact a lot on the sets of Kyunki?
I like everybody on the sets and interact with everyone. I have more scenes with Yash and Suvarna, but for me Shilpa is a darling.

How is it to work with Smriti Irani?
It is very amazing to work with her. I have learnt a lot from her in this short span of time.  I can say she is an institution in herself, filled with vast knowledge.

You started off as a singer and then took to acting. Don't you feel the itch to participate in any singing reality show now?
I want to participate, but I am not getting any offers for a celebrity singing show; also I cannot enter a talent reality hunt show now. If anything interesting comes up, I will surely take it up as singing is my passion. I would have loved to participate in Jhoom India or Superstar…

You are a part of Bollywood ka Ticket wherein you had a big argument with Puneet and he finally ended up being your partner. How is your rapport with him now?
I have put the past behind me, so I don’t want to talk about it. All is going fine till now; he is doing his work, is very punctual and hardworking. He also understands my sincerity to work. Till the time he does not mess up with work it is fine, otherwise, he will have to face the consequence.

What do you have to say to the bossy attitude shown by the newcomers on the first day in Bollywood ka Ticket?
I certainly did not like the way they behaved. There is something called dignity and as the mentors said, there is a thin line of conduct between being confident and over confident, so they need to have a reality check! Even King Khan of Bollywood is humble!! I would like to tell them that we are all here to make a mark for ourselves and let us concentrate on that!!

You performed really well last week and got full scores. How are you gearing up for the battle ahead?
Battle has already started and we have already geared up for that. Let’s see how we fare!

Who do you think is your toughest competitor there?
Everyone here is a tough competitor, I would say. In fact, I would not want to think about this, rather will want my performance to speak.

Is there any dream role that you want to do?
I want to do Rani Mukhejee's role in Black and Bunty Aur Babli. In the same way, want to do the roles of Madhuri Dixit in Dil and Lajja.

13 years ago i liked her in betiyaan only, now i don't like her.

13 years ago Thanks for the interview.

PLease Note: The option botton which we had to rate the article is not working .
Please solve it

+ 5
13 years ago love Twinkle...she is so honest and straightforward..hope everything works the best for her!

13 years ago Twinkle seems to appear as an honest and forthright person.