Tia Kar the untrained singer from Mumbai who aspired to become a dancer expresses her sorrow on not making it to the Top 5 on Sony TV's, Indian Idol 5..

Were you primed for the elimination?
No, I wasn't prepared and it came as a shocker also because I have always been receiving considerable audience votes. Though I'm not a trained singer, with time I just felt I could make it to top 5 at least, and it's more upsetting as I got evicted on my Birthday.

So what are you taking back from Indian Idol?
Firstly I would like to thank all the judges and my fellow contestants because they all have helped me in learning the technical aspects related to singing. 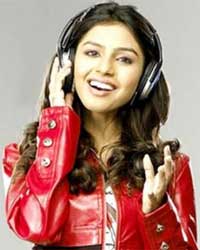 Has singing come to you as a passion?
No actually it's a gift from my dad, he is a play back singer. He has sung for many movies one of which is Hero Hiralal. Otherwise I'm studying law by profession.

Then how is that you haven't got into professional training for the same?
That's because I was never keen to get into singing. Instead I aspired to become a dancer and have even learned classical style for 3-4 years. It were my friends who thought that I could be a singer and insisted me to give auditions and I landed in Indian Idol.

You were looked upon as a sympathy vote gainer by others, what's your take on it?
I don't think so, I sense audience supported me through their votes as they sensed a scope of improvement in me. Apart from that I have received standing ovation in theatre round and have also a pendant from Sunidhi Madam, so I think I have proved myself.

So what's next on the chart?
I wanted to learn music, so now I'll work on the same as I want to make my career in play back singing.

How much positive are you about re-entering the show through wild card that's just around the corner?
I don't think it will happen now because the show has already found its Top 5 but I still would be preparing myself for the same.

So what kind of reactions have you been receiving from your loved ones?
My dad is quite fine wit it but my younger brother felt really bad as he had been with me since audition days.

Whom do you see as top 3 contestants this year?
I think Sreeram, Shivam and Rakesh Bhaiya as I was very close to him and I want him to be in Top 3.

So first thing you wish to do after going back home?
I am going to play with my dogs; I was really missing them a lot. My friends have planned a birthday party for me, so its celebration time once I reach home.

concernedperson 3 years ago little known fact about Tia Kar her mother Archana Sharma works in film industry as well as a junior artist.

+ 5
10 years ago She sang better than Bhoomi at least! But if she trained to be a dancer, why didnt she try in DID instead of II? Her father should have given her classical training as she has a sweet voice which only needs training to succeed.

God bless u dear and all the very best...

+ 3
10 years ago Yes Tia can sing..if not great..better than Bhoomi

+ 2
10 years ago she if really practices n give some guts she can actuully sing really well u know her voice is one of a kind!

+ 2
10 years ago lol at people who say she 'cant' sing.. Im pretty sure she could sing no wonder why she was given a yellow card by the judges to be in indian idol. Tho she's not a 'great' singer..she could SING..and if she keeps practicing and focuses a bit on her sur..she will make it big :)
God bless you, Tia. Wish you all the best.