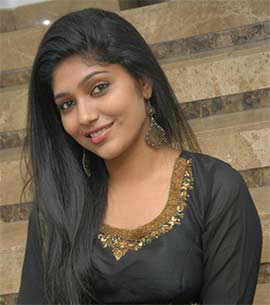 Kannada actress Samyukta Hornad is foraying into Tamil as well Telugu film industries with the forthcoming Prakash Raj-directed trilingual romantic-drama "Un Samayal Arrayal". She thanks her stars for an opportunity to work with the acclaimed actor-filmmaker.

The film is titled "Un Samayal Arrayal" in Tamil, "Ulvacharu Biriyani" in Telugu, and "Oggarane" in Kannada. It is releasing in cinemas Friday.

"To act with Prakash Raj sir is a very big deal. I should thank my stars for it. I was initially nervous to work with him but it all changed when I was on sets. The best part about the film is that Prakash sir is directing it as well acting in it. Therefore, he was guiding us like no other director," Samyukta told IANS.

"We also got scolded but it was only because we deserved it. We had so much to learn and we happen to make a few mistakes. I have been to acting school, studied film and TV in college, but this was a different experience. I had to unlearn whatever I've learnt before this film, and learn again," she added.

Besides Samyukta, the film also features Sneha and Tejus in lead roles.

Samyukta, who had to learn Telugu as well Tamil for the film, says shooting in three languages was a challenge.

Food plays an important part in the film, which is the official remake of Malayalam superhit "Salt N Pepper".