Ali Merchant who essays the naughty yet cute Rajveer in Zee's Saat Phere feels that his character is similar to that of Ranbir Kapoor in the movie, Bachna Ae Haseeno. "My entry scene was also shot in a typical filmy way with me riding a horse and saving the lady", quips the actor. 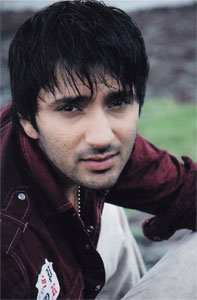 Featured Video
The actor is working with two new comers in Rachana Parulkar (Saawri) and Aamrapali (Shweta) in the Zee show. Talking about them he says, "I have just started interacting with them. All I can say is that they are nice human beings. Aamrapali always keeps asking me whether Amber Dhara (the Sony show on conjoint twins which had Ali Merchant too) were actually conjoint in real life or not (smiles). It seems her brother is a big fan of mine".

Ali gives the girls a helping hand whenever needed. "I help them out with their scenes if needed", quips the actor.

Ask him about the speculations of Saat Phere going off air, and he quickly states, "Well, after the leap and my entry in the show, I don't think the show will shut down".

About the competition between him and Sara as their shows Saat Phere and Bidaai come at the same time slot of 9, the actor avers, "I simply cannot compete with my better half. Bidaai is also my favorite show. Both channels are watched in so many countries and the shows have its own pros and cons".

Talking about your personal life are there any plans for marriage? "Of course, but not now!! We are planning to tie the knot two years from now".

Lastly, when can the audience see both of you together in a show? "Now we are open to reality shows where we both can participate. The only problem is the tensions related to the show, but we are all prepared for it," concludes the actor.

13 years ago thnx. they are bth talented actrs and are a cute couple! i wish he stayed in yeh rishta! he was much btr thn the guy thy hv knw! evn though he is a good actr aswell bt ali is btr!! the othr one is annoying! gd luck anyway!

13 years ago omg this guy is w/sara from bidaai....shes too cute for him

+ 5
14 years ago Who ever is taking the interview... it damn cheeky...hehehe Saif gave good answers... very sarcastic ones too!