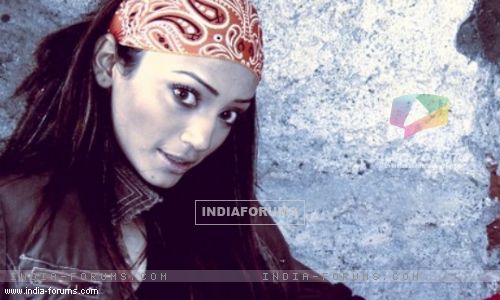 Popular vamp Soni Singh who was seen in a negative stint in Star Plus' Saraswatichandra, entered the reality show Bigg Boss 8 to change her image and gel with other inmates who come from different background. Having stayed in the house for almost six weeks, Soni Singh has been evicted in the house and talks about her journey in the house with TellyBuzz.

Here is Soni sharing her experience -

How has your journey been in the Bigg Boss house and how has your personality transformed through this show?

It is a wonderful experience and it is sad that I had to leave the house as I was having fun in the house and I wanted to stay back for longer. Talking about my personality transformation, I have learnt many things in the house. The thing which I was not aware of before was my fighting spirit as there was a moment in the house during Lambas v/s Babbars where all the housemates were staying without all the basic necessities especially without salt, that made us more strong to fight against our weakness. So with the help of Bigg Boss I got to know many new things about myself and it taught me to be stronger mentally as well as physically.

What could be the reason of your eviction?

I actually don't know the reason. Frankly I am shocked with my eviction as it was much unexpected. Even people outside were thinking about Sushant Divgikar to get eliminated but I was thinking about Minissha Lamba who might come out of house. So right know I am seriously clueless as to what happened and how I have been eliminated from the show.

Talking about your fellow inmate and brother Upen Patel how has been your relation with him?

I have started missing him. We use to have fun together mainly when he ask me to iron his hair. He used to convince me by saying Shayari and doing different things every time. I shared a very good bonding with him. He always used to stay around me when I missed my family in the house he is actually like my brother and will always be in touch with him. After my eviction he really got upset and I am sure he will miss me too in the house.

Many of the house inmates took your relation with Upen wrongly and they stated that your being biased towards him and even the Snap deal caller misconstrued your relation?

Yes because the inmates used to think that I am giving him food by hiding from them. But it was that Upen loves the food cooked by me and I use to prepare my food differently because others use to have non veg. But I used to keep a separate share of food for him which was not liked by the other inmates. And talking about our relation that has been pointed out, my family, me and Upen knows how pure is our relation.

You indulged in a fight with Gautam Gulati so if given chance would you meet him after he comes out of the house?

Yes why not, I don't know why my fight with Gautam has been highlighted everywhere as during the task it happens to indulged into an argument and it happened with other inmates as well but yes during a fight with Gautam I cursed him for which I felt really bad and I apologized to him the same night. After that we had a great time together and we even played games in the house where we both had enjoyed each other's company. He is a nice guy and funny as we use to sing the song Urvashi Urvashi along with him, so there is no hard feelings for him.

Which inmate would you like to meet after they come out of the Bigg Boss house?

I would like to be in touch with Karishma Tanna, Upen Patel, Diandra Soares, Sushant Divgikar and Natasa Stankovic as I was very close to them, the other inmates also are friends of mine but I am very much closer to five of them.

You celebrated Diwali in the Bigg Boss house, how different was it?

It was a lovely Diwali, a very different experience of Diwali. We inmates use to get less ration but on the auspicious occasion of Diwali we were showered by tasty and different varieties of food. Salman Khan also entered the house on Diwali, we got a surprise from Bigg Boss that had clothes from our houses that came on that day and then we performed and enjoyed the festival to the fullest. So I would say it was my best moment and best Diwali I had in my life.

Which contestant according to you has brighter chances to win the title of Bigg Boss 8?

Right now I canâ€™t say as its long way to go. It is very difficult to judge as who can win the title as people are getting evicted unexpectedly so I would wish all the contestants good luck and may the deserving person win be it my friend or not.

Where do you see yourself after Bigg Boss 8?

I see myself more into reality shows now because this show being the first reality show, I had  an awesome experience so I would love to get such an amazing experience further in my life.

For now I will be spending all my time with my near ones i.e. my family and friends. I will roam around for some time then after my mind gets refreshed, I will start thinking about my future ventures.

Lastly any message you would like to give to your fans?

Thank you so much for showering your love and blessing that helped me to stay in the house for such long, I know all my fans must be sad with my eviction but you never know I might enter the house again as a wild card entry (smiles).

6 years ago Soni, want to see now in Lead role on Sony Channel. Big fan of yours.

+ 2
6 years ago All praises for Gautam?like seriously u never leave a chance to degrade him uske chara ter pe career pe n what nt nd nw he is a nice guy?haha u are soo sweet :-|

+ 3
6 years ago Soni singh you are a very nice person best wishes to you. Wish you had great life. And loved you inside bb house. You and upen rocked it.

6 years ago Its good that she doesn't have any grudge against anyone..

+ 4
6 years ago unexpected eviction..OMG she really need to be back on earth..lol..
Unexpected only for her..not for us