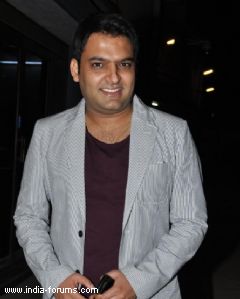 Standup comedian Kapil Sharma says he can't force Sunil Grover aka Gutthi of 'Comedy Nights With Kapil' to stay back on the show. However, he doesn't want rumours to vitiate the atmosphere.

Kapil took to micro blogging website Twitter to put an end to speculation that there is a rift between him and Sunil.

"I love Sunil and Gutthi. They are always welcome in the show. I can just request him. Can't force him...But whatever...I love him...Please don't spread rumours," he tweeted.

Though sources from the channel have revealed that Sunil has not left the show but is on a holiday, he will soon be seen creating a laugh riot at the Zee Rishtey Awards 2013.

Gutthi is an integral part of Kapil's show which is aired on Colors.

If sources from the channel are to be believed, talks are still on with Sunil to hold him back from leaving the show.

Mehak_KPian 6 years ago Don't worry Kapil Sharma, we love you and will always love you. You are the best comedian.

nicky13 6 years ago Plz come back Guthi aka Sunil ... So that we can also sing that song aap aaye hai comedy nights mein vapis Hasi khili hai gulshan-2 ... And Kapil we r always with you ... Love ur show :)

Willy_Wonka. 6 years ago Sunil plz come back. We are missing gutthi very much :(

I hope Gutti Character stays and You entertain us always.

PRAGD 6 years ago Kapil don't worry we are with you.