Telly Buzz caught up with this cute lass for a frank chit chat on her experience of winning the first ever reality show she took part in.. 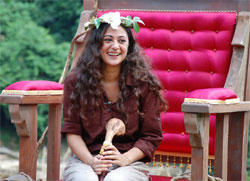 Featured Video
How do you feel after winning?
Obviously, I feel very happy. Although I have won, I think all the finalists are winners in their own right, as it was really tough, both mentally and physically to last out the two months. The viewers might have not really appreciated the hardship we went through in terms of food and living in the wild.

What got you to sign up for the show?
I always love adventure, hence when they suggested that I will get to spend two months in the wild, I agreed. Having said that Iss Jungle is not only about roughing it out. It also has the human interaction element. I would call this show a cross between Fear Factor and Bigg Boss. We have to endure hunger pangs, weight loss and still work as a team without losing our cool.

Do you think your lack of controversies helped you lift the crown?
The show is such that sooner or later your true self will come out. You cannot play games when you are under surveillance 24*7. I have always been an easy going person. I also have a funda of agreeing to disagree with people who I don't get along with, rather than creating a scene. May be the audience saw this facet of my personality and voted for me.

But you did have problems with Akashdeep Saigal?
I cannot take comments which hurt my dignity. Hence I gave it back. But I soon cooled down and again returned to my point of agreeing to disagree; hence they were no issues in the last week. Towards the end, we were just counting the hours; hence nobody was in a mood for a fight.

Among all the tasks you did which were your best?
The food task eating those rats and insects. Many contestants purposely lied that they were veggies just to wriggle out, but I played the game fairly. Another task which I really enjoyed was when my leadership was challenged. Akash and I had to balance in a hole. It was quite tough yet I held out for 52 minutes and ultimately it were the doctors who asked me to stop.

There was much hue and cry regarding the bathing part?
The international format demanded bathing under the water fall as that's how people living in the jungle actually bathe. However our culture is not too comfortable with a woman bathing in public. The channel also did cross the line when they showed the bathing scenes from weird angles and gave it lots of footage.

When we were there we just followed the format and you can't expect us to remain dirty for two months. Its only when I came back did I release that it had become a big fuss.  Certain girls like me smartly wore swim wear which did not raise any eyebrows, while others like Negar wore a bikini. But I don't want to comment for she comes from a different culture, where a two piece is common.

Among all your co campers, who were you fond of?
IshQ Bector, but he was out in the first week itself. I felt very bad that he was eliminated.. I was quite close to Anaida, Chitrashi, Aman as well.

What will you do with the winning booty of 1 crore?
I will buy a house ...

What next?
I am open to any kind of good stuff, be it both reality and fiction. But I cannot dance for nut. Winning a reality show has definitely helped my career and that too in my very first attempt.

How has Iss Jungle changed you?
Before this show I would never ever step into the kitchen but now I love to make food. Since I have come back I am still making the same stuff, we would make in the jungle.

Do you miss the jungle?
Others will say yes but they will not mean it. However I am different, being a person who likes the wild, I do really miss the openness and commune with nature. When I returned to Kuala Lumpur I got claustrophobic in a mall. Later when I had a burger I got a stomach upset.

How would you react if you bump into Akashdeep?
I would just wish him hello and move on.

+ 5
13 years ago She did her challenges very bravely. she deserved to win!

ammynridz 13 years ago Mona should look at her first, what was she wearing! and then other!

+ 3
13 years ago Even Mona wore a bikini..why is she lying?
Also, when was she controversy free???