Tanuja who is seen playing a totally new avtar on TV, in Yash Patnaik's show on 9X, Babban Bhai Vs Bimla Tai talks about her role and much more...

Why did you agree on doing Babban Bhai Vs Bimlatai?

I always kept receiving a lot of offers. They were all saas-bahu sagas where I had to play the head of the family. I cannot see myself doing these soaps that go on and on. 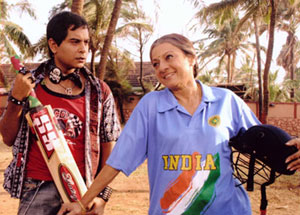 Featured Video
What did you like about Babban Bhai... that had you giving your approval?

When I was offered the role, I liked the concept. When I heard about the character I was to play, I freaked out. I thought to myself, what can I do with this character that imparts a social message in a funny way. I was happy that I would be doing something to make people laugh. Besides the interesting role, the producers agreed to all my terms and conditions. What's more it's a weekly which suits me fine. It's great fun doing this serial.

How is Gaurav Gera on the sets? Looks like you have a great tuning with him.

Before we did the serial, I had met him in Canada when he had done a small role in Tanisha's Neal N Nikki. Also, I used to watch Jassi Jaissi Koi Nahin and loved his character Nandu in it. I thought he was cute in that. I was a fan of his!

How did he react to acting with you?

He was cool. He said he was thrilled to act with me. We share our birthdays though we are 100 years apart! I think he's extremely mature for his age and a multi-faceted actor. Both of us improvise on the script and dialogue to make it better. He is a great co-actor.

Bimalabai is a social worker who helps children and youngsters staying in bastis. On one such visit she meets Babban who is following in the footsteps of his father, an underworld don. On his first assignment as a don he hits a guy and later fumbles. He's lost his car keys which are with me. I manipulate him and the idiotic don listens to me. The next time I chance upon him at a meeting with a corrupt minister. Babban has come to kill him, I try to dissuade him and in the scuffle he gets shot while I get hurt. I am declared brain-dead while he requires a heart transplant to survive. My heart is transplanted in his body. After he recovers he realises that he cannot carry on with his misdeeds. I appear as a bhoot with a daily newspaper and coax him into stopping crimes and criminals. I threaten to stop breathing and choke him if he doesn't follow my orders!

How is it working with Yash Patnaik?

He is an amazing producer. He is a very calm person and quite understanding. He truly believes in quality work and his shows reflect that. He also takes care of everything and everybody on the sets. I would always like to work with him again and again.

Are you also doing any films?

I have three films on hand. One is being directed by Satish Kaushik, it is untitled yet and there's Halle Dil. I am also acting in one Bengali film.

What do you have to say about Ajay and Kajol's movie U Me Aur Hum?

Ajay's been inviting me to see the rushes but I have told him I will watch it when it's complete and in the theatre on the day of the premiere. I can wait till then.