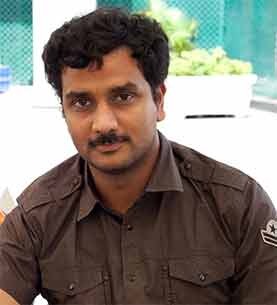 Actor Srinivas Avasarala's passion for writing and storytelling encouraged him to don the director's hat for forthcoming Telugu romantic-comedy "Oohalu Gusagusalade". He says he enjoys the storytelling process more than acting.

"I've always wished to be a director ever since I started my career as an actor. I enjoy storytelling so much more than acting that I even ghost wrote for two Telugu films. I wanted to control the whole storytelling process. So when I finally found a producer, I decided to become a director," Srinivas told IANS.

He, however, says that he doesn't like to discriminate acting from direction.

"I can't tell if acting or directing satisfies me the most because at the end of the day you want the audiences to be entertained and it doesn't matter if you're an actor or director. Maybe as a writer-director you're more responsible because everything on the screen is yours," he said.

"For most romantic comedies, the inspiration comes from this play. My film also has the spirit of a Woody Allen film. I have tried to find a common ground for these two sources of inspiration and made my film based on that," he added.

"It took me a while to make this film because not many producers were willing to make this kind of movie without stars. But thankfully, I found a producer who appreciate cinema as a craft and didn't see it from a business perspective," Srinivas said.

According to Avasarala, writing and direction is one and the same because in both these crafts "one tries to control the narrative".

"I don't see any difference in writing and direction. What's really important in both is that what you write should not get changed on screen and audiences should connect with your characters," he said.

Being a first-timer, Srinivas felt making a low-budget film with limited resources was a big challenge.

"Although my producer liked my story, he wasn't convinced that I could direct. Therefore, I had to make the film on low-budget and make use of my limited resources wisely. A creative process can't have such constraints but that was the challenge and I'm glad we successfully finished the film," he added.

He's unsure if being an actor helped him in the process of direction, but he says "being on the sets of films helped him a lot".

"I don't know for sure if my acting experience helped me in direction, but the performance of my actors has come out very well. I strongly feel my experience on being different films' sets helped me understand the logistics involved in the making of a film," Srinivas said.