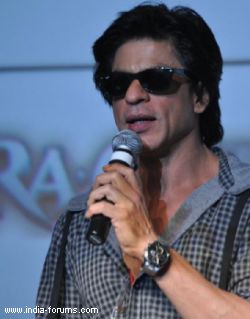 New Delhi, Nov 2 Superstar Shah Rukh Khan, who turned 46 Wednesday, says he neither feels older nor wiser. For the actor, who is riding high on the box office success of his superhero film 'Ra.One', his day will be well spent by sleeping and relaxing.

'Going to sleep now...this birthday will celebrate with a well deserved many hours of sleep...thanks for your wishes. Don't feel older or wiser,' Shah Rukh posted on his Twitter page.

King Khan, as he is lovingly called, says he got emotional when his fans sang a birthday song for him outside his residence in Mumbai.

'Thanks so much boys and girls. Celebrated my birthday in the plane 30,000 ft in the air...then on the tarmac...finally with my little girl and boy. Was so touched when I reached home from bathing...sooo many ppl waiting outside the house and sang happy birthday for me. Had tears in my eyes,' he added.

Shah Rukh's rise from a small screen actor to the reigning star of Bollywood is what fairytales are made of. His latest offering 'Ra.One', in which he plays a superhero, has set new standards for the use digital technology in Indian filmmaking.

The star has been wished the best in life by celebrities on his D-day.

Others like designer Manav Gangwani and jewellery designer Farah Khan Ali too have wished him.