Remember Yuvika Choudhury? The baby-faced beauty who shot to fame as a participant of  Zee Cinestars ki Khoj couple of years ago, is a happy girl these days. And not just because she has removed the Y from her name! Now known as Uvika, she seems to be getting a lot of accolades for her small role as a starlet in Om Shanti Om. 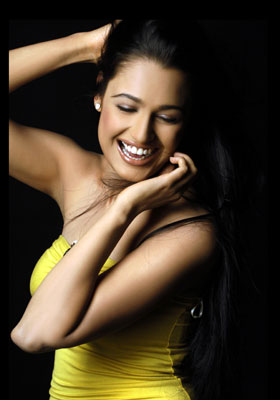 Featured Video
Unfortunately, the going was not very smooth for Uvika just after she won the Zee Cinestars ki Khoj contest. She did take up some modelling assignments, including some prestigious brands like Ponds, Rupa (with Sanjay Dutt), Kotex and Daawat Basmati Rice, but people really started noticing her when she did the Toyota Innova commercial with Aamir Khan. Her Thumbs Up ad (with Kunal Kapoor) generated quite a bit of interest about her and even landed her a prized assignment.

It was in one of the commercials in which Farah Khan noticed her and offered the big break in OSO. Says Uvika, "Farah spotted me in the Thumbs Up commercial and gave me a call for the screen test." Expectedly, Uvika passed the screen test with flying colours and was selected for the role of Dolly - SRK's co-star and childhood friend in the movie. Remembers Uvika, "I was not sure how my role will shape when Farah Khan called me. It was more like a dream come true for me. I did not want to ask what my role would be like and how long my screen presence would be! Being a part of the movie itself was an awesome experience. It was a lifetime experience for me working with SRK and Farah."

However, she regrets two things about the movie. "After the end, when they show the credits in OSO, I am not there.This happened because I was in Paris while the sequence was being shot. I still regret not being present at that time. The second regret is the fact that I could not travel with the OSO team for the promotions. I was extremely busy with my next film Summer 2007 when the promotional tours of OSO was going on."

Summer 2007 is a film directed by Suhail Tatari's and is scheduled for a release in January 2008. The 22-year-old actress plays the lead role alongside Sikander Kher in this college flick. "It's about life in a medical college and is a film with a moral message," says the actress. "It was a great experience working with Sikander. He is the biggest prankster I have ever met", says a smiling Uvika.

It seems to be a busy time for Uvika. Is she happy? "Yes, I am very satisfied at the way my career is shaping up. I have worked very hard and with sincerity and left everything else to God. I know God is there to fix everything for me."

So, how is the off-screen Uvika Choudhury? "I am a very simple girl. My glamorous image is just in the movies. At home I am quite different." Uvika has a very interesting comment to make on dressing. "I like both Indian and western dresses. But my policy of dressing is to wear whatever I am comfortable in. I won't wear a mini skirt just for the sake of wearing some skiny and hot dress. I will wear that only if I am comfortable in it. I decide my fashion code myself. I have done a course in fashion designing and am confident about designing my dresses." Quite a statement for a person who is managing to get a toehold in the industry, isn't it?

Uvika's family is completely satisfied with her work and are very supportive. Best of luck for the winter release of Summer 2007, Uvika!

+ 3
14 years ago Nice article, i was so surprised when I saw her in OSO cos I was also wondering where she went, all the best for her, she has worked hard, I remember her in Astitva too.. thanks for the article!

14 years ago its not correct to write that she won coz she didn't!!!!! she was not even in the finale
But never the less she was very gud in astitva aswell as in OSO. Best of luck to her for her upcomming projects.

14 years ago It's great that she is moving ahead in her career. She portrayed her role very well in OSO.
By the way, earlier in this article, it is mentioned that she won Zee Cinestars but I don't think she was the winner, was she? I thought Sarwar and Aditi were the winners of the show which Yuvika was part of. :)
Anyhow, it doesn't matter whether or not she was the winner of that particular contest, she is proving to be a winner in life. :)

14 years ago thnx for sharing!
she looked pretty in OSO