View Profile
Rahul Mahajan had a very bad experience with his first marriage. He made a bold decision to take a second go at this life-changing commitment thro' a medium as public as television. Apparently, he still is very happy of that decision and adores his choice- Dimpy Ganguly. He vows to be by her side and through all the decisions of her life. Of course, he hints he expects the same from her too!

Over to the newlyweds… 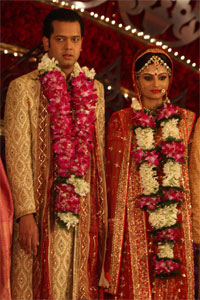 How are feeling now Rahul?
Rahul: I feel very happy. It was a dream to get married and now it's happened.

Why choose Dimpy?
Rahul: Dimpy as I always say is my very good friend. In fact, we are best friends. And that's very important. So I chose her.

How much did you get paid to do this show?
Rahul: Money is not an issue. So I don't want to go into it right now. My whole intention was to get married and not money.

Dimpy, do you find Rahul having all the qualities of your dream boy?
Dimpy: He is exactly what I had dreamt of. He IS my dream boy.

Is your next step to get into a show like Pati Patni Aur Woh?
Rahul: (Laughs) No till now there's no such plan. We're leaving for Maldives on the 10th and will be returning on the 24th. So I will make future plans only after returning.

Dimpy, isn't there a wide age gap between you two?
Dimpy: Yes, there is an age difference. But I've always had friends who belong to an older age group than my age group. I relate to my older friends better than those my age. Even though he is 13 years older than me I don't really think that's something that should bother me.

Many rumors stated you were to tie the knot to Nikunj but changed your mind in the last minute. Was there any truth to this?
Rahul: Rumors, are what they are - rumors. Nikunj, Dimpy and Harpreet were the three girls I had to choose from. And I chose to marry the one I love.

Dimpy will you continue on your way to becoming a model?
Rahul: She's just 21, she's got a long way to go. I'm sure she will succeed in whatever she takes up and I will support her fully in all her endeavors. I am confident that Dimpy will also support me in all my projects.

What do you have to say on the violation of Gladrags contract by Dimpy for which Maureen Wadia had sued her?
Rahul: According to me, if you want to get married you just require your parents' permission. And for all those who did this cheap publicity stunt, I really have nothing to say.

Rahul, you used to praise all three girls equally. Now that you've chosen Dimpy, what will your reaction to the other girls be?
Rahul: It was always known to all of us that my marriage can take place with only one person. All the girls gave me so much love so I will always maintain a sense of respect towards them.

Poonam Mahajan's absence at the wedding remains unexplained…
Rahul: Poonam has taken a decision to stay away from politics and for that matter any kind of limelight. She is serious about her decision and we respect that.

Don't you feel these kind of reality shows end up hurting sentiments, for example in this show Nikunj and Harpreet got hurt?
Rahul: Everyone knew at the beginning of the show that many hearts are going to get broken. It's not just them who got hurt, even I got hurt. But that was necessary to make the choice.

Dimpy when did you start modeling?
Dimpy: I started modeling in 2008. I've been into all kinds of modeling…print, movies, ramp…

You are going to shift your base from Kolkata to Mumbai now?
Dimpy: Well, Mumbai is my sasural now so…(laughs).

So you'll be working in Mumbai now?
Dimpy: Well, I'd like to give my married life more importance at first.

Rahul you've been through a difficult past, so with what feelings did you take up the Swayamvar?
Rahul: Well, not everyone gets a second chance. God has given me a second chance and I'm happy about it. In fact I feel I've taken a second birth on 6th March.  In fact we both share the same birthday too- 25th July. I think it's a new start for me and now I should concentrate on the future and not the past. Most of the times we waste our lives by worrying about either the future or the past but I'm living in the present and making the best out of it.

Is a month enough to know a person?
Rahul: See, it's not a matter of a month or ten days or ten years. Either you strike a chord or you don't. There were a lot of off-camera moments when I got to know every individual. But apart from that if feel this is all designed by the divine powers. Many a times you love a person so much yet you end up not marrying that person. I think my union of Dimpy has been possible only because God willed it.

Will you be ever getting mixed up in politics?
Rahul: Politics was never away I think. But entertainment business is to make my bread and butter. First I'll try to settle my family then the people in the country.

But you will continue to be involved in the entertainment industry?
Rahul: Yes, because politics is not a business no? The salary of MPs is not even enough to buy clothes. For politics you need to work from the grassroots level for a span of an entire generation. If people want me to be a leader then it's their choice. I will try to connect with people and if I feel I deserve then only I will contest otherwise I won't.

What about films?
Rahul: Yes I will take films but after giving it a lot of thought. Because films are a very dicey thing, sometimes they go this way and sometimes they go that way. So only after giving it a lot of thought will I take up any project. People have seen me in certain ways in shows. I need to bear that in mind too.  So I will take a decision with a sound mind.

What about passport issues?
Rahul: I can just hope that the authorities in Delhi give me permission, you know…it's not in my hands…I can only pray…you can also pray for me.

Nikunj said in a statement that she does not want to get married to you.
Rahul: Later she explained to me that she was misquoted.

Dimpy, when you were in Kolkata you did some bold photo shoots. Will that continue now also?
Dimpy: Obviously now that I'm married, I have some responsibilities; actually I am done being a model. I want to grow as an actress now.

Rahul bursts: Bold, what you mean by bold. Just because she poses on a beach wearing a bikini, you can't call it bold. If the same is done by a Julia Roberts or a Charlize Theron or the big actresses of Bollywood you call it stylish. They get paid higher so ultimately it's about money no? Money is making a person. I don't agree with such a loosely used term of 'bold'. I will always stand by her and so will my friends and family. She has done nothing wrong so far.

Is it okay with you if she continues doing that?
Rahul: If there is true demand for it in the market and if somebody can afford the rates she's charging for a calendar shoot (laughs), then yeah sure.

Is this show a product of the demand of the market?
Rahul: I don't know, it's my life. Today's my last press conference with Imagine. I think it's our life now. The boat is already in the ocean. It doesn't matter if it's about market. After one year there will be somebody else and you'll be talking to that person.

What are the similarities and differences between you two?
Rahul: We don't judge each other. But our food habits differ. I'm a vegetarian and she being a Bengali is a non-vegetarian. I get angry very fast and she doesn't.

11 years ago he got married to Dimpy coz of her mehendi colour, omg, Rofl. This could be the most irrational reason for a person to get married to someone.

so Mr. mahajan does not mind mrs. mahajan doing bold modeling and thy both will support eachother on their future endeavors. as if we dont know what endeavors thy both r planning to do.

now i can say for sure that this man loved nikunj but straying & flirting is mr. mahajan fidhrat/fate so she backed out seeing his rasleela with dimpy and he was forced to pick btw harpreet & dimpy and he chose the one who would suit his lifestyle. good luck mr & mrs mahajan.

11 years ago WE ALL KNOW THAT YOUR LOVE FOR DIMPY WAS LOVE AT THE FIRST SIGHT. YOU LIKE HER FROM BEGINNING AND NEVER ELIMINATED HER EVEN AFTER KNOWING ABOUT HER EX-BOYFRIEND AND YOU TRIED YOUR BEST TO GIVE MORE ATTENTION TO NIKUNJ SO THAT AUDIENCE BECOME SURE THAT YOU WILL MARRY HER AND ON 6TH YOU MARRY DIMPY TO GIVE US A SHOCK. THIS SHOW WAS ONLY A PUBLICITY STUNT. AND IF YOU WANTED TO DO SWAYAMVAR THEN WHY DID YOU DO IT ON TELLY? YOU DIDN'T WANT TO MARRY. YOUR ONLY INTENTION WAS TO GAIN PUBLICITY.