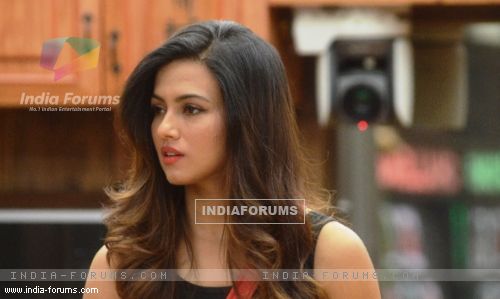 Actress Sana Khan, who got evicted from Bigg Boss - Halla Bol on Sunday, says she couldn't behave like former contestant Ajaz Khan in order to entertain the viewers.

Sana entered the "Bigg Boss" house as a challenger, but was not able to do much and got voted out after spending two weeks there.

She was nominated alongside Rahul Mahajan and Sambhavna Seth in the series which is an extended version of popular reality show Bigg Boss 8.

"The house needed some loud amplifiers and woofers, so a walk-man like me was not able to make any impression inside there," Sana told over phone from Mumbai.

"Everybody there wants to fight and create mess to seek attention. In my two weeks' journey, I did my best to bring some positivity inside there but everything happened opposite to what I thought.

"I can't be like Ajaz Khan, who can entertain people with his loud behavior to stay in the show for a long time. He has no competition with me. My personality and work style are totally different from his," she added.

Since its first day, the spinoff has witnessed a lot of negativity inside the "Bigg Boss" house with challengers and champions fighting with each other to take their respective stand.

Last week, actor Upen Patel entered the house as a guest after Ajaz was asked to exit the show.

Asked who according to her is fake inside the house, Sana said: "All of them are fake in 'Bigg Boss' house. I didn't see any real emotions there. People were changing groups daily. All the contestants were changing opinions about each other on a day-to-day basis."

6 years ago Gautam Gulati FTW! He rocks in BB house.

6 years ago Pritam Signh is the best. please mark pritam singh in this article