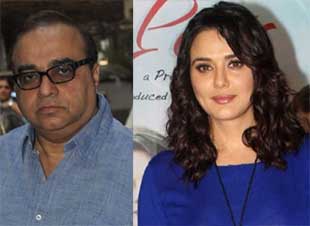 While most of the Bollywood celebrities are silent over Bollywood actress Preity Zinta's allegation of molestation against her former beau and business partner Ness Wadia, director Rajkumar Santoshi has extended full support to the actress over the issue.

Santoshi, who co-scripted Preity starrer "Dil Hai Tumhara", said: "I don't know what the truth is, but I know Preity very well. She is very hard working and sincere. She is very courageous, and outspoken."

At the trailer launch of "Chaarfutiya Chhokare" here, Santoshi said: "If the allegation has been made by Preity against Ness Wadia, then I will definitely appreciate her decision and stand by her in her decision."

"Just as it is wrong to commit a crime, it is equally wrong not to speak up. I appreciate her decision to file a complaint against that concerned person and I am with her," he added.

Preity lodged a written complaint against Wadia with the Marine Drive police station Friday, last week. She accused Wadia of grabbing her hand and abusing her during a cricket match in Wankhede Stadium in Mumbai May 30.

“I felt helpless & powerless”, says Preity Zinta as her mother, ...