After being the heart of Bhojpuri movies, Manoj Tiwari gets talking with Telly Buzz about his current venture of hosting Chak De Bachche, the reality show for 9X. Not just that, he also claims that he is the best host after Big B for reality shows.


Here is what the Bhojpuri King has to say.. 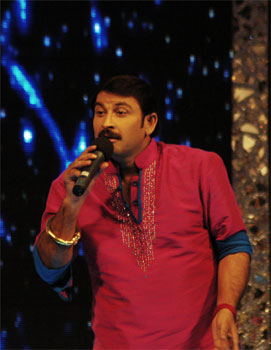 Featured Video
How did you get the offer for the show Chak De Bachche?
I got the offer directly from Gajendra Singh ji, the Director of the show. Since the time he was directing reality shows like Voice of India, Sa Re Ga Ma Pa and many others, I have always been a part of his show, be it as a Celebrity guest or a judge. He asked me host a show and thatï¿½s how I got the offer.

After being on the big screen, are you comfortable hosting a show on television for the first time?
I am not just comfortable but also I am enjoying my work. Firstly, I am left free to do what I want to with the script and there is not much of detailing in the script. Most of the time my detailing is with Roshini, my co-host. Secondly, I have been given a platform that I am already acquainted to. I am known for my Bhojpuri performances. I feel that I am connected to the show. Till date I felt that I was doing it for myself and now I feel that I am working for all the villages in .

We heard that the people from Chandoli village had purchased a set top box to watch your shows on 9X, how do you feel?
I am really touched by this act of the people in the village and I think this is just one of the examples and there are lots more to state.

Who has been your craziest fan till date?
There have been many cases like these. For instance a small kid of around 4-5 years, who lived in Kota Rajasthan would not do anything i.e. not have food or study till he did not see my movies. Once his parents called me and I inturn explained the kid that if you listen to whatever your mother says, then I would definitely come and meet you. In the hope that he would meet me, he started to do everything that his mother said and I finally met him too. I personally feel that kids may not recognize me by my face, but they know me by my voice.

What is your take on the incident on Chak De Bachche where none of the girls were ready to pair up with the two boys?
Well we have 24 kids and there should be at least 12 pairs which are mandatory. I think nobody wanted to pair with these kids basically because one of them is a son of bandmaster and people feel that he is outward. Its not that these kids are not educated, they are well educated. May be Roshini feels that she is doing a show, but I feel it is a challenge that I have taken in real life.

What do you think of the concept of Chak De Bachche?
I think the very thought of thinking that the village guys don't do well and they don't achieve anything, I want to break this. I also feel if they win after competing with the metro rockers then it would be the biggest achievement for people in the country. I feel that the 60% crowd in villages of would taste the fruit of success.

What is the best experience that you have on the sets of Chak De Bachche?
I actually observe the metro rockers very keenly. There is a song which goes like this 'Ek Main hoon ek Tu hai..Janiaaaaa'...Immediately the judge commented that there was a change in the pitch of the song and that is when I jokingly said, of course as there is an injection which the girl has given to the guy.The entire cast along with the judges were laughing.

After being so famous in Bhojpuri movies and now also hosting the show, what are your plans further?
I plan to do a lot of Bhojpuri movies. I will host shows too as I can make my screen play very well. I will opt for reality shows and will never be seen doing drama shows on television. I feel amongst the hosts from reality shows, I am the best except for Amitabh Bachchan. I am hosting Chak De Bachche now and it is now the number one show according to TRP's. But at the end of the day, I am a Bhojpuri actor and people like me for being one. I wish to take Bhojpuri films to a big level. Till now the Bhojpuri films don't get the budget. I hope in future we do get more budgets for Bhojpuri movies too.

13 years ago Wat a joke! Lolz!!! I had never seen a host as insecure as MT. Let me add here that Roshni was much much much better than him any time & any day.

+ 3
14 years ago oh puhleez!!!
he is d best host after amit ji????
forget it hah!!!
useless creature!!
thanx for the most funnoest article on if..
cant stop laughing

+ 3
14 years ago Its no.1 show according to TRPs???? I thought Gajji's show has only conspiracy theories.. But now even such facts are being revealed which are not true!!!

Well thats what you can expect from Gajji.. A person who said 7-8 difference votes, can say anything possible!!

- I am sure Gajendra must have told you that...