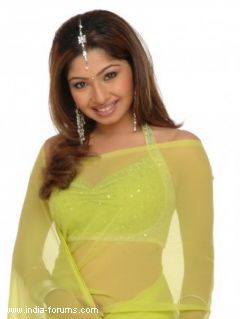 Our Thursday column is dedicated to 'Singletons' of Tellywood. This week we have Monaz Mewawala aka Jharna Raichand of Sahara One show Jhilmil Sitaaron ka Aangan Hoga. The charming Monaz is single and is amongst the eligible bachelorettes of the tellywood industry.

Being single, are you ready to mingle?

Yes I am ready to mingle. But, it depends on when I am going to find the right person. I don't want to mingle with any guy. He must be a person of my choice.

What's the first thing you notice in a guy?

His intelligence and confidence.

What's the one thing that puts you off the most in a guy?

If you could mix one Hollywood and one Bollywood actor to create your prince charming, then who would you choose?

What irritates you the most about the opposite sex?

If there was matrimony or a dating ad for you, what would it read like?

He must love animals. Apart from being an intelligent guy, he should be able to entertain me.

Riteish Deshmukh is Ready for a Kiss with Pulkit Samrat; Confirms on ...

8 years ago Aw I remember her from Jabb Love Hua! She was hilarious as Esha :)

whatever76 8 years ago Please Tellybuzz or Tellywood or whatever you are, please please please explain what "mingling" means to these people before you start asking them the infamous mingling question. I am coming to this website for a month or so and each and every actor/actress that was asked this question has no idea what "mingling" means. Mingling is just socializing, meeting people in parties or functions and when you feel an attraction towards anybody during that time, you stop mingling and be/connect with that person. And these people think you actually "mingle" with the person you like. Ridiculous and Hilarious. You mingle until you find the person and then you stop... why don't they get such a simple concept. This actress is going to "mingle" when she finds the right person... hahahahahahaha. And none of the people leaving comments know what mingling is either. They are learning the wrong thing from these people. Ignorance is bliss, I guess.