View Profile
There was a lot of hype and hoopla during the release of her maiden movie – Rok Sako To Rok Lo. Unfortunately, the movie did not live up to the hype and despite her having signed a multi-film contract with Planman, nothing much happened in the career of the pretty Manjari Phadnis. Last seen in Vikram Bhatt's Mumbai Salsa, Manjari is all set for a comeback with Aamir Khan's Jaane Tu Ya Jaane Na and Sourabh Shukla's I Am 24. Srabanti Chakrabarti spoke to the actress at length on her failures and future plans.

You seem to be all set for a comeback with two big-ticket films up your sleeve. Tell us something about Jaane Tu Ya Jaane Na.
As you all are aware, the original producer of this film was late Jhammu Sugandh. This was almost a couple of years back when I had auditioned for this role. Pakhi Tyrewalla 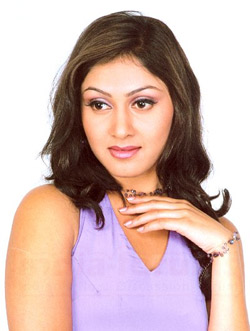 Featured Video
(Abbas Tyrewalla's wife) selected me after my audition. Unfortunately some problem cropped with between Jhammu-ji and Abbas and work on the film came to a standstill. Later on, when Aamir Khan took over, everything was fine and the film got completed.

I am playing the role of a romantic girl called Meghna, who lives in a world of her own. The music of this movie (by A R Rehman) is fantastic and I have two songs in the film. Unfortunately, I cannot say anything more about my role! Wait for the film to be released.

How was your experience working with a fresher like Imraan Khan on one hand and first time film maker Abbas Tyrewalla on the other?
The only word that can describe, this unit is 'awesome'! I have never worked with such an energetic unit. Abbas is a very intelligent director – he knows exactly what he wants from the cast and directs us accordingly. He, being a very energetic person, ensured that the mood in the sets is always very vibrant. That really made a lot of difference. With Imraan, I never felt that I was working with a newcomer. He has an eye for even the minutest detail, just like his uncle Aamir Khan. He is undoubtedly the surprise element in the movie. Genelia, who is a superstar down south, has no tantrums at all.

You seem to be heading south like a lot of other heroines. Tell us something about your venture in South Indian cinema.
Yes I am doing a Tamil film titled Muthira. It is also a Vikram Bhatt film directed by a famous cinematographer called Jeeva. Apart from this, I am also acting in an untitled Telugu film opposite Naresh. Language is the biggest hurdle for me when it comes to South Indian films. In Hindi films, since I can understand the language, I can emote much better. My voice will be dubbed for both the films. But I am slowly learning the languages and hopefully after a few more films, I should be able to speak the language.

You have been in the industry for almost five years now. How has been your experience so far? What are your future plans?
I had a lovely experience in these five years. I am from a completely non-filmy background – my father was in the Indian Army and I have traveled throughout the country because of his transferable job. I am a typical Maharashtrian girl from Pune who never expected to make a career in films. But here I am!
Currently I don't have any new films in hand. Am waiting for Jaane Tu Ya Jaane Na and I Am 24 to be released. In the latter, I am paired opposite Rajat Kaoor and will be playing an 18-year old girl. It is a comedy film.
Srabanti Chakrabarti